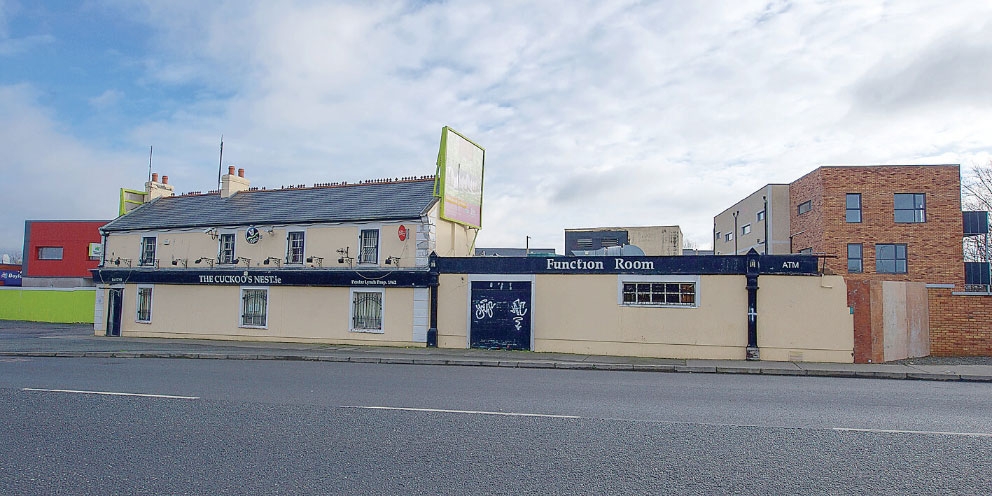 RESIDENTS of a new housing development adjacent to The Cuckoo’s Nest pub on the Greenhills Road in Tallaght feel “betrayed” by the developer’s attempt to shelve plans for the development of a gastro pub on site, to instead construct a four-storey apartment block.

The newly-formed Temple Woods Residents’ Association, named after the housing estate beside The Cuckoo’s Nest, will be holding a public meeting about the plans on Monday, February 18, at St Kevin’s Resource Centre in Kilnamanagh at 8pm.

The residents’ association has also prepared a draft objection to the planned modification, citing a number of concerns.

Applicant Legendstand sought permission for the “demolition of the remainder of the existing public house and in its place, the construction of a four-storey apartment building.”

In late January, the application was deemed invalid by county planners as the newspaper notice did not comply with planning and development regulations.

However, in the past fortnight, Legendstand has resubmitted the application, which seeks the demolition of The Cuckoo’s Nest and the construction of 11 one-bed and 15 two-bed apartments in a four-storey apartment building.

The Temple Woods Residents’ Association draft objection to the plans cites alleged “developer misrepresentation” as one of their reasons for objecting, as the development of a gastropub at the site of The Cuckoo’s Nest was mentioned in the brochure that was given to potential buyers.

Tommy Kenny from Temple Woods Residents’ Association told The Echo: “We feel betrayed – we feel that we’ve been lied to [by the developer].

“It’s a serious disappointment, we’re devastated. One of the selling points when we bought our house was that we would have an old-style gastropub.

“[An apartment block] could adversely affect the price of our house,” explained Mr Kenny, who added that the apartment block also presented safety concerns for children playing in the estate as it could provide unobstructed access to a car park and a busy road.

Mr Kenny concluded: “It’s like a fairy-tale has been swapped for a nightmare.”

Concerns about parking and traffic issues are also included in the objection, as is concern about the historical relevance of The Cuckoo’s Nest as, even though it is not a Protected Structure, the residents’ association states that it is “a historical structure of great social and recreational importance”.

The proposed modification to the planning permission has caused consternation in the community, with over 1,300 people signing a petition titled Save The Cuckoo’s Nest Pub.

Deirlem Ltd, the building company that constructed the Temple Woods development, was contacted for comment but they did not respond in time for print.

The residents’ association have until March 4 to lodge their objection to the plans, and the council will make a decision on whether to grant permission for the modification by March 25.