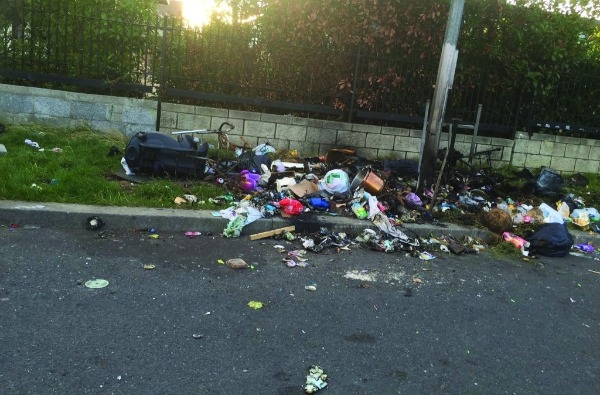 NEARLY 500 more reports concerning litter and illegal dumping have been received by South Dublin County Council in the first eight months of this year, compared to the same period in 2015.

According to official figures provided to The Echo, 2,288 reports were received by the litter Warden Service between January and August of 2015.

However, this figure has risen considerably for the same eight-month period of this year, which to date has seen an additional 477 reports pushing the number of complaints up to 2,765.

A minimum of 234 man hours is also spent per week removing illegally dumped waste from across the county, with the financial cost of removing this material weighing in at around €363,000 – and that’s just the amount spent between January and June of this year.

However, despite the resources being diverted by the council into removing illegal dumping, the issue continues to grow, with residents stressing that changes need to be made by the council in relation to how it targets the issue of illegal waste and dumpers.

One resident who lives in Kiltalown Lane in Jobstown, which is a hot spot for dumpers, told The Echo: “There was rubbish dumped up on the lane last week which was removed by the council, but two days later there’s every bit as much rubbish back up there again.

“I know that the council is very stretched and residents around Kiltalown Lane and Jobstown are trying to get out and keep the place clean – but we can’t remove skip bags of waste.

“I think we need quicker action from the council when they get a report – one dumped bag attracts another.

“The longer rubbish is left dumped on our rural roads, it just encourages others to do the same – and flags certain areas as easy places to dump.”

A spokeswoman for the Ballycullen Alliance also spoke to The Echo about persistent problems with serial dumpers in areas such as Daletree.

She said: “Some of this dumping is coming from within the community and the council keeps coming in and clearing it, but they are not getting to the core of the problem.

“There is a very small number of people dumping and the council should ensure that their tenants are acting responsibly.
“Fundamentally the litter policy for the council does not work and is basically dependant on members of the public collecting evidence.

“Residents are happy to help but it shouldn’t be their responsibility to get to the root of a problem, we need support from the council and the Garda.”

When contacted by The Echo, the council said that it working with local public representatives and residentS associations regarding the issue of illegal dumping in Daletree – and is currently arranging for the installation of CCTV to deter illegal dumping and to assist with the prosecution of offenders.

The council also said: “We are fully committed to enforcing the provisions of the Act to tackle individuals who are engaged in illegal dumping.

“All reports of illegal dumping and littering are logged and tracked from original complaint through investigation to enforcement with all dumped material searched for evidence by the council’s Litter Warden Service.

The council said that it is also continuing with its Education and Awareness Programme, which strives to “promote an anti-litter message among residents by increasing their understanding of how best to manage waste, as well as the negative impact of littering and dumping on the county”.

Reports of littering and dumping can be made to the council’s Litter Warden on 4149220 or on the Environmental Agency’s anti-dumping hotline, 1850 365 121.