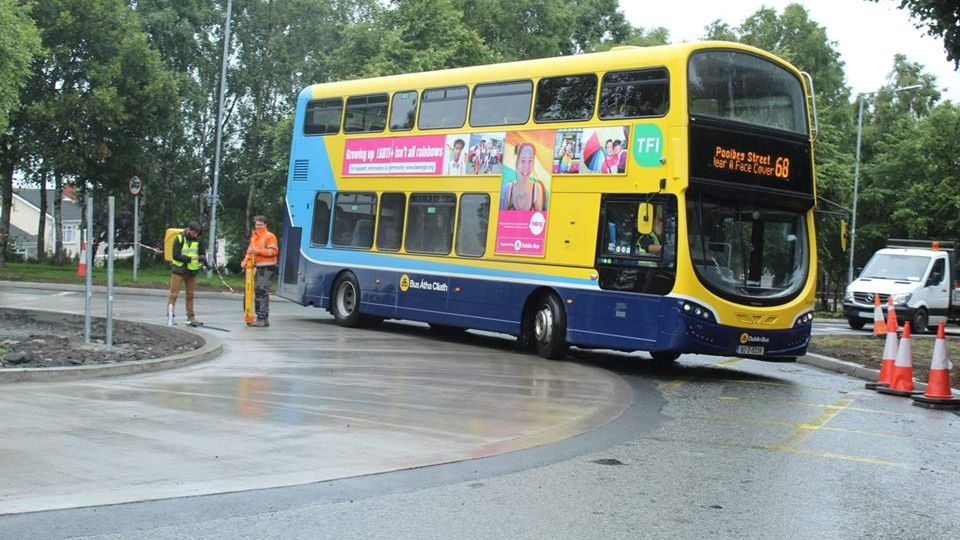 OPPOSITION to the loss of a traffic lane at a busy junction continues this week.

Protests have been taking place regularly at the Woodford Hill roundabout in Clondalkin, often starting at 6am in the morning.

A bus navigating a tight spot at the roundabout (Image: Aaron O'Keefe)

As reported in The Echo on June 24, residents object to the reduction of a two-lane roundabout to one-lane, fearing it will drastically increase traffic congestion.

Works for the Monastery Road Improvement Scheme Phase 4 by South Dublin County Council are taking place to “provide safe walking and cycling facilities” between Clondalkin Village and the Luas line, according to the council.

Residents met with council engineers on Friday in the area for a meeting.

Amy-Louise Carey, chairperson of the newly formed Dutch Village Residents Association, says residents have been “ignored” by the council.

“We have asked them to call a halt to the works but we have been ignored,” said Ms Carey.

Residents objecting at the roundabout

“At the meeting on Friday, the council spoke but we weren’t allowed to speak. We felt like we were being talked to.”

A petition by Carey to reinstate the works at the roundabout has received close to 2,600 signatures as of Wednesday morning.

“The council told us Orlagh roundabout in Knocklyon was a similar project and success story but we linked in with the residents in Knocklyon and they told us that is not true, and told us not to let them finish the works,” she said.

Residents say they were unaware of the reduction of a traffic lane in the plans.

Last month, the council said drawings that went on display during the public consultation “clearly show one lane on all approaches and exits to the roundabout.”

“We had no idea we were losing a whole lane of traffic,” said Ms Carey.

“They say they complied with the regulations but we have nearly 3k signatures. We have seen so many near misses at the roundabout. Vehicles are right on top of each other and it is difficult for buses to navigate around it.”

Residents were due to meet with the council again on Wednesday (July 8).

Cllr Francis Timmons (Ind), one of a number of local representatives who are supporting the residents, feels he was “misled” when he voted on the proposal in 2018.

He says traffic at the roundabout during the day is “pure madness” and is calling on “the council to work with councillors and local residents to find a resolution.”