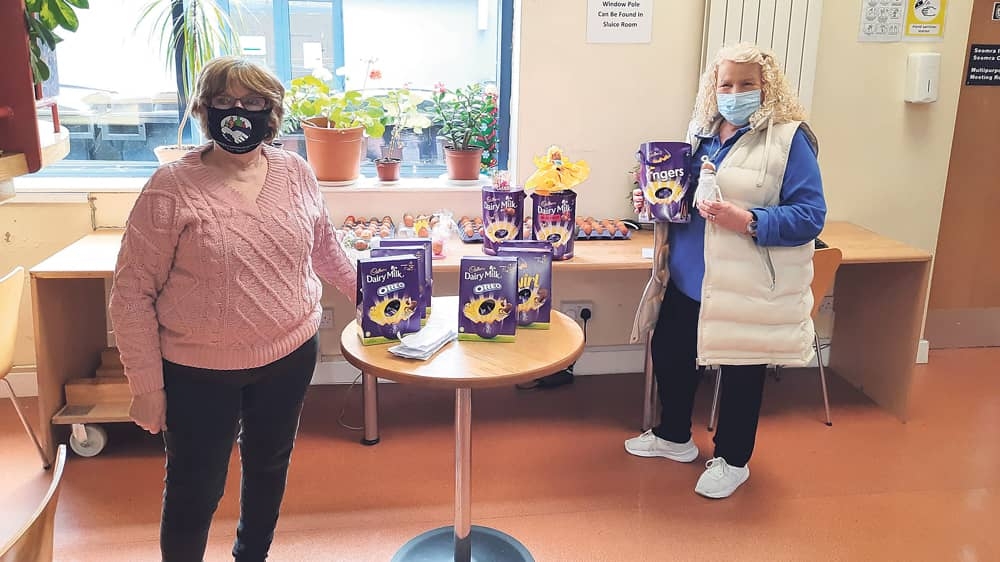 Residents have cracking time at ‘egg-stravaganza’

AN EASTER ‘egg-stravaganza’ was organised by Killinarden Community Centre for senior members of the community last weekend.

200 hard-boiled eggs were painted or decorated with a message by members of the Killinarden community in an Easter event organised by Killinarden Community Centre for Easter.

Hilda Hamilton, Manager of the Killinarden Community Centre, told The Echo that the idea was to engage and keep in touch with more senior members of the community.

“We are quite conscious that there would be seniors in the parish that would not be online, so we are keeping in communication with the young people through Facebook and whatnot, and most of the older people aren’t online.

“We did something at Christmas, we did a ‘senior Santa’, and we said we would do this exciting ‘egg-stravaganza’ for Easter and have some fun.

“To participate was better than just to knock with an egg. People are definitely missing the communication.

Marie Kavanagh with her Easter Egg

“We got 200 eggs and we hard-boiled them and delivered them to the seniors. We have got 960 seniors in the parish according to the last census, so we did not have enough to do all that.

“We gave out the 200 hard-boiled eggs and we just included a little Easter message and 3 markers and said look, do what you can with the egg – it’s just a gesture and a way to keep us communicating with you.

“We said you can write a simple message or decorate it and we will then ‘egg-change’ it for an Easter egg. It was great fun.”

Hilda said that they received an almost 100 per cent take up on the egg decorating gesture, which came as a nice surprise.

“We were flabbergasted with what we got back. So many of the eggs were decorated and some had little simple messages such as ‘bring back the bingo’, ‘I miss my friends’ and very heart-warming messages such as ‘thinking of the families that have lost someone’ and ‘stay safe’- it was amazing.”

Hilda said the ‘Easter egg-stravaganza’ was a big success, which couldn’t have taken place without the help from all the fantastic volunteers.

“We had a great team of volunteers. It was hard work because we had to call with the egg and then call back again to collect the eggs and exchange them with the Easter eggs.

“It was very successful, it created a great bit of craic for everyone, young and old, we all enjoyed it and it was great to see.”