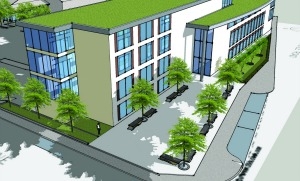 OBJECTIONS have been lodged with South Dublin County Council over the proposed Ballyowen Primary Care Centre in Lucan.

Residents have raised concerns about the scale of the development, and its impact on local amenities – along with increased traffic and ramifications for two existing health centres in the area.

If planning is permitted, the site is scheduled to be located at the corner of Ballyowen Lane, bordering Castle Road. Proposals include the provision of a GP surgery, nurses, home-help, physiotherapists and occupational therapists.

Residents are concerned the development will increase traffic in a “chronically congested” area with schools and two supermarkets nearby.

With the centre set to be located at an existing retail car-park, residents fears parking space for customers will be restricted.

Local representatives and politicians have also made submissions and objections, supporting residents’ concerns.
Minister Frances Fitzgerald says the proposed development is “significantly higher than houses opposite at Abbeywood and Colhurst. “This has the potential to dramatically alter the character of the area,” said Minister Fitzgerald.

Representatives cite two existing private Primacare GP services located in Ballyowen as a source of concern.
Fine Gael Councillor William Lavelle said: “I would ask the planning authority to carefully assess the need for another facility in Ballyowen Castle.”

Independent Councillor Liona O’Toole says the plans “lack information.” It is not clear if this is going to be a public service or if it’s going to be used for private practice,” said Cllr O’Toole.

Primacare Medical and Dental, Ballyowen Lane, submitted an application supporting the development, which they say is “long overdue for the area.”

Fine Gael TD Derek Keating, who has campaigned for the facility for a number of years, says the effect of the centre will see a “major shift from patients having to trek across the Blanchardstown or Tallaght Hospital” giving people access to “services close to localities.”

In a submission last February, the HSE sayS the site “provides a suitable location” and they have “reached agreement with the developer to lease facilities on their completion.”

The HSE previously confirmed to The Echo that the future of both existing health centres will not be decided until the Ballyowen Primary Care Centre is complete.

Further information has been delivered to the planning authorities by Green Design Build. South Dublin County Council have not yet made a decision on the application.