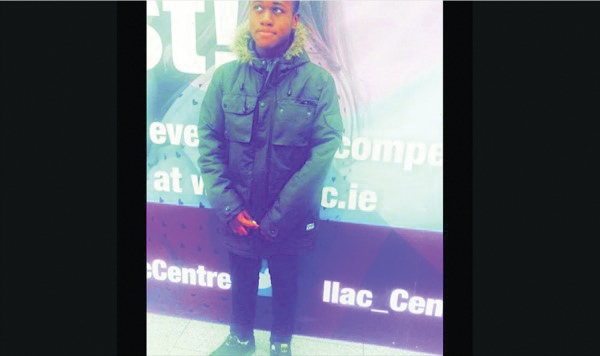 TRIBUTES have flown in for Moyle Park College student Frank Bessong (13) – who died tragically after getting into difficulty while swimming in the River Liffey on Saturday.

Frank was a secondary school student at the Clondalkin school, and played with Usher Celtic Football Club. Known as ‘Frank Home Slice’ on his Facebook page, his page has been inundated with tributes from shocked mourners.

Family, friends and teammates of Bessong laid flowers on the bank of the Liffey near the site where he drowned.

The Dublin District and Schoolboys League paid their respects on their Facebook page “offering sincerest condolences to Usher Celtic FC on the tragic death of their young player today following their game in Memorial Park.”

The body was recovered shortly after 4pm from the Liffey near Conyngham Road at Islandbridge, and brought to Dublin City morgue in Marino where a post mortem was arranged.

His family are understood to be originally from Nigeria but now live in the Dublin 8 area.

Sinn Féin Councillor Daithí Doolan said his thoughts and sympathy were with the family of the teenager, and appealed for “everyone to be extra careful when in or around water in this good weather.”