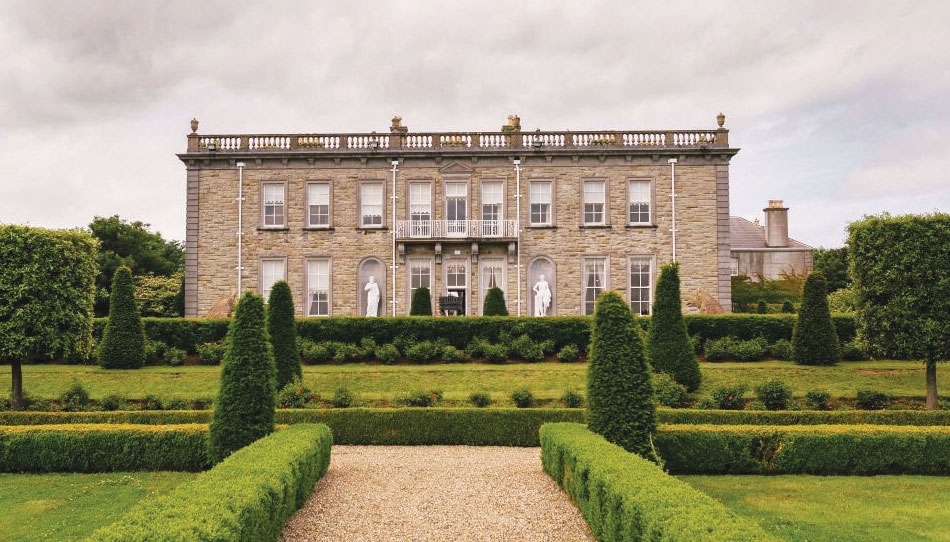 For this week's piece we are hopping on the Bus Eireann bus Route 126 in Rathcoole, and we shall be making the short journey just outside the county to Johnstown in Co Kildare.

After alighting from the bus outside the Centra shop, we will then walk the 25 minutes to Palmerstown House Estate, the location for this week’s column.

For it is here the house, once owned by a Viceroy of the British Crown in India (no less!), is located.

The house and lands were originally owned by the Flatsbury family, who also brought into being the village of Johnstown.

One of the family, Robert, rose to prominence to become The Sherriff of Kildare, basically the King’s highest representative in the county, but they lost all the houses and lands they owned after the Irish Rebellion of 1641.

A lot of buildings built in Ireland at the time had what you might call a universal look about them, hence this large dwelling bore numerous similarities with two others places featured in past columns, namely Castletown and Marley Park House.

Palmerstown House was handed over to the Bourke family, who were a very powerful family who originated from Co. Galway, but saw their bases of power expand elsewhere on the island thanks to their strong support for the British occupiers.

The family hailed from the powerful Norman De Burgh dynasty, and the first foray into Ireland by their ancestors was to help Strongbow, and the first parcel of land they were given was in Limerick.

Over time they would expand their holdings island wide, principally in the City of the Tribes, and in other parts including Co Kildare.

Distant relatives of the owners of the property just outside the capital included the famous MP Edmund Burke, who is only one of two Irishmen – the other being Henry Grattan – who have a sculpture inside the House of Commons in London, and Richard O’ Hara Burke, who alongside W.J. Wills were the first persons to traverse Australia from North to South.

However they decided to make a return journey, where both died from starvation, having already travelled 3,700 miles via foot and camel back, which was roughly 9/10 of the trip completed.

In 1852, Richard Southwell Bourke, the 6th Earl of Mayo was – to much surprise – appointed Chief Secretary of Ireland at the tender age of 30.

Richard was born in Dublin in 1822, to Robert and Anne Burke, and his brother Robert was to also make a successful foray into politics as an MP for the constituency of Kings Lynn in Norfolk.

In 1847 Richard was to be elected as MP for Kildare, a position he held for five years before heading up North to represent the town of Coleraine in Co. Derry in Westminster.

Again after a five years he was on the move, this time across the water to the town of Cockermouth in The Lake District, and not far from the Scottish border.

In 1869 he was to nab one of the most prized positions within the British elite when he was named as Viceroy of India, and now wielded power many aristocrats could only dream of.

It was under his rule that the first ever census of India took place in 1872, and he also promoted the further construction of the railway network in the country.

However he was not to last long in the role, or on planet earth, as he was stabbed to death that same year by a  convict, whilst on a visit to the Andaman Islands.

In 1873 a new species of butterfly was found on the Islands, and it was posthumously named after the deceased ex-Viceroy.

In 1923, Anti-Treaty rebels burned the house down as part of a campaign, as they saw it, to wipe away the last remnants of colonialism in Ireland.

In a submission seeking compensation for losses accrued from the fire, the then Lord Mayo claimed he was visited unexpectedly by a group of men who told him they were under order to burn the house, and they would be carrying out orders as requested full stop.

He managed to get agreement that the rebels would allow him 20 minutes to round up the rest of his family and the servants, so they could make it to safety, before the burning began.

He sought recompense from The Irish Free state of £38,000 (Almost €700,000 in today’s money) 95 per cent for the damage caused, and 5 per cent, which amounted to the fee owed to the architects who drew up a list of what it would cost to rebuild the ruined dwelling.

The house was later sold to a W.J. Kelly who owned an outfitters business in Dublin’s Clanbrassil Street, which earned him the nickname “Trousers Kelly”.

A report from 1938 in the Irish Times, spoke of him being “well known in Irish racing circles” and indeed it was on the lands in Palmerstown that he managed to train a good number of horses that went on to win major races in their time.

The Mansfield Family were to later turn the place into the wedding venue that it is today, and it was then sold to the Comer Brothers, who ironically hail from Galway, who are the current owners.