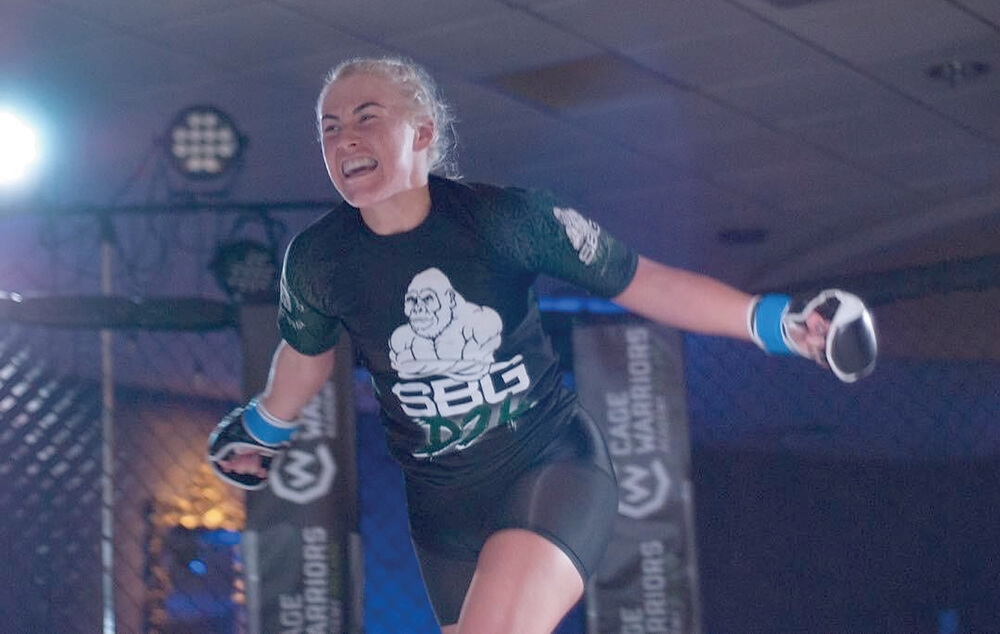 SPRINGFIELD native Shauna Bannon kicked-off her mixed martial arts career in style with a TKO win over Catherine McFadden in Belfast on Sunday.

The five-time World Champion kickboxer made a seamless transition to the world of MMA and took only two minutes and 12 seconds to stop her opponent at the Devenish Complex.

Bannon has her eye on a professional turn in MMA (pic: Stephen Towers)

Speaking to The Echo after her amateur MMA debut, Bannon said she was “delighted” and “buzzing” after the win.

“It’s literally a blur, I can’t really remember the whole thing but I know that I definitely landed more shots than her.”

Opening exchanges at the Cage Warrior Academy Ireland event were, indeed, dominated by Bannon as she strung together some nice combinations, landing two punches and a head kick before taking to her opponents back.

McFadden, who trains out of Kombat Jiu Jitsu, reversed Bannon’s advances to tie her up in a clinch against the cage until the SBG D24 fighter broke free and landed a clean shot.

“I hit her… and she just wobbled, I was coming in then to try finish the fight but the ref pushed me away and that was it,” said Bannon.

In what was originally scheduled for three rounds of three minutes each, the six-time European Kick-boxing champion made her debut at a higher weight class then the usual 55kg she would fight at in kickboxing.

“When the fight was finished, I just went up to Paddy [Holohan] and said that I want my next fight as soon as possible, but maybe at about 57kg because we were fighting at 63kg and she was much bigger than me,” she continued.

“She was much, much bigger, I think she might have been bulking but I didn’t put on any extra weight really, once you weigh under the 63kg going in your fine.”

Bannon made the leap from kickboxing in Tallaght Martial Arts to MMA eight months ago after taking part in a Jiu Jitsu class in SBG D24 under the guidance of Holohan.

Head coach of TMA and Shauna’s father, Martin Bannon joined the 25-year-old in her corner along with new coach Holohan for the bout.

“Paddy asked me who I wanted in my corner and I told him I didn’t know because I wasn’t sure if I’d be able to have him, because he’s not in [SBGD24].

“He actually suggested my dad to me and it was great to have him in my corner, even though he wasn’t giving instructions, that’s what Paddy was doing but to get me in the zone before the fight.”

Bannon’s first round TKO saw her fly up the pound for pound United Kingdom and Ireland ranks where she now sits in 70th position.