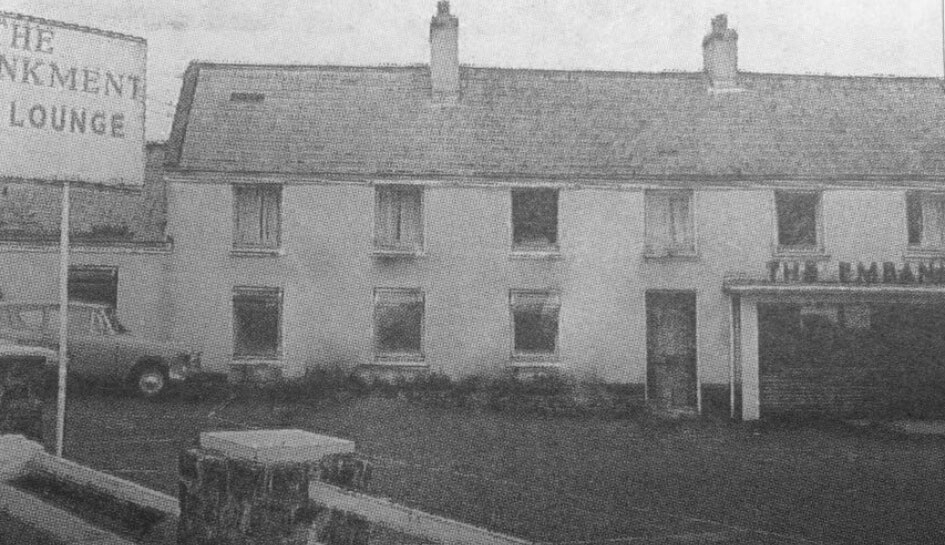 Legendary venue where the cream of Irish entertainment used to play to packed out audiences night after night.

Today we are waiting for a 49 at stop 4749 Ballycullen Road-Firhouse Park to The Square and will then hop on a 65 to stop 2578 Blessington Road-Rosedale, for it is here one of the most iconic entertainment venues in Ireland – the Embankment – once stood.

The Embankment back in the day

This establishment first opened it’s doors in 1963, owned and operated by the renowned Mick McCarthy who was regarded as one of the great raconteurs, many would place him in the same bracket as the owner-occupiers of the famed O’Donoghues on Merrion Row in Dublin City Centre and The Bailey Hotel in Howth.

McCarthy was born in Listowel County Kerry, and he grew up in a cottage on the grounds of St Michael’s College, where his father was a caretaker.

Two of his uncles were jailed during the civil war and his Mother was a member of Cumann na mBan, this somewhat shaped his character as he was to become a disciple of left wing viewpoints, with many a charity fundraiser organised in the Blessington Road venue.

Upon leaving school he tried to join the Irish army in Limerick but they were not recruiting at the time so like many of his peers he bluffed and begged his way to England and after a short stint as a messenger boy in London began work as a bricklayer.

When World War II started, he enlisted in the Royal Air Force (RAF) and saw active duty in Africa.

After the war had ended he moved to Belfast and was to become the head of the Bricklayers Union there.

His brother was the famous songwriter Seán McCarthy, who wrote many songs including ‘Shanagolden’ and ‘Red Haired Mary’ among others – songs still recorded by folk groups to this day.

Mick made his way to Dublin to continue his endavours in the building trade.

He was then to take on a major career change as he became the new owner and operator of ‘Kate Kennedy’s Embankment’ about six kilometres from Tallaght Village.

Ask any person of a certain age in Tallaght (or elsewhere for that matter) about The Embankment and you better not be in a rush anywhere, for you are sure to be regaled with numerous stories of the wonderful nights the person spent there and the famous bands and singers they saw.

One of the most famous acts to appear on the Embankment stage on many occasions was the world renowned Dubliners.

Containing the gentle giant with the spellbinding voice that was Luke Kelly, the band was formed in 1965 at a meeting in O’Donoghues pub on Merrion Row and was first known as ‘The Ronnie Drew Folk Group’.

A while after that the members decided they would prefer a new name for the outfit, and thus began a lengthy discussion as to what they would change it to.

Getting a bit irritated at the length of time they were taking to think of something, Luke placed a book on the table, pointed at the title, and exclaimed “What about this?”

The book he was reading at the time was the classic ‘Dubliners’ written by James Joyce and first published in 1914.

They were to receive widespread publicity and notoriety when Radio Telefis Eireann banned their record ‘Seven Drunken Nights’ from the airwaves after the all seeing all powerful Catholic church protested against the lyrics in the song. This was despite the original version in Irish having been played numerous times since it was released a year previously!

A famous story that some might file under ‘urban legend’ but others swear is in fact true relates to 1966.

It goes like this: the now Nobel-Prize winning troubadour Bob Dylan was staying in Dublin City Centre and asked a taxi driver to take him to wherever a great nights entertainment could be found.

He was taken to the Embankment where The Dubliners were playing and he was apparently transfixed by their show and stayed there til the wee small hours.

Another famous and highly regarded balladeer who was born and reared not far from the venue and sung their regularly was Paddy Reilly.

Singing one night at an impromptu session in the bar, a passing McCarthy was so impressed by his vocal prowess that he urged him to sing in the concert venue next door, and this lead to him taking up folk singing as a full time career.

Probably his greatest success was his recording of ‘The Fields of Athenry’ written by Pete St John who had also written other household name songs such as ‘Dublin in the Rare old Times’.

While the song was first covered by another balladeer of note, Danny Doyle, it was Reilly who took the song to stratospheric heights, with his recording spending an amazing 73 weeks in total in the Irish charts, reaching a high of number four in the process.

Long after the Embankment had closed, The Rathcoole entertainer became a member of The Dubliners when Ronnie Drew departed.

McCarthy sold the Embankment in the early 80’s and ran another pub, The Lady Gregory in Jervis Street near Dublin’s North Quays.

From then on the Blessington Road venue sorely missed the magic touch and know-how of it’s former owner, and the stricter drink driving laws was the final nail in it’s coffin.

So why not head over to Youtube to check out a youthful Paddy Reilly singing The Curragh of Kildare, alongside other videos of Clannad, The Bothy Band and others at the acclaimed venue that overflowed with the crème-de-la-crème of Irish talent?