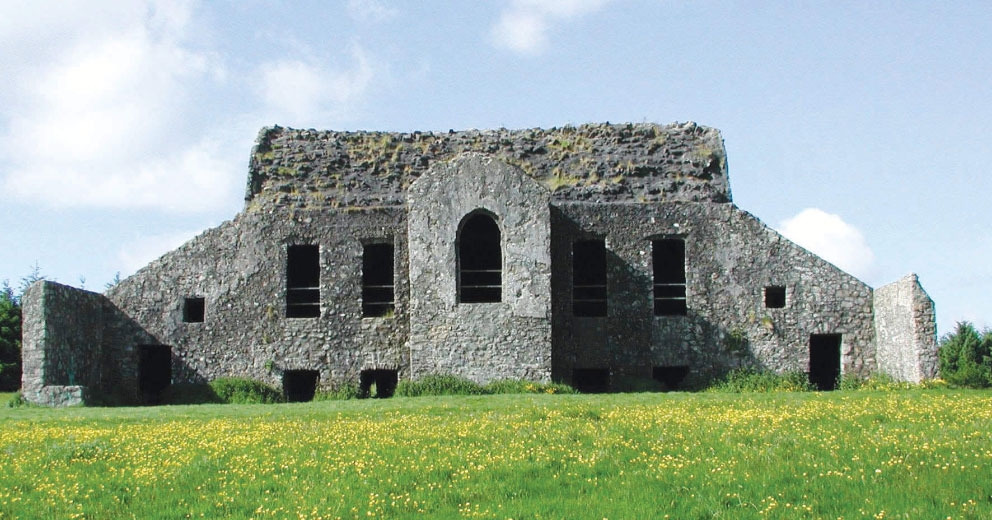 For this week's piece we are walking out of Corkagh Park, hopping on a 69 bus to Clondalkin Village, then a 76 to the Square to catch the 175 bus to the St. Colmcille’s Way bus stop, and then walking the 35 minutes to our  final destination – the Hell Fire Club.

As a child growing up in Tallaght this landmark fascinated me no end, particularly due to the legends that were associated with the place.

One particular memory from the 80’s I have is of fellow pupils in fourth class telling us they were having a sleepover at the Hell Fire that weekend with the scouts.

Another chap then swore blind that his uncle went into the derelict building, walked backwards 99 times while reciting the Hail Mary, and the devil appeared.

When on Monday morning he was scolded by a classmate who roared at him “I walked backwards 99 times and saw nothing, and it made me get sick too ye liar”;  to which he responded “You musta only did it 98 times”.

The person who built the structure that came to being a ‘Hell Fire Club’ was William “Speaker” Connolly, a man who was regarded as the most powerful man in Ireland, and one of the most powerful in the whole of the British Isles in the 18th Century.

He was born in Ballyshannon County Donegal and was the son of a Protestant Innkeeper.

Amongst his many notable positions were,  being Commissioner of the Irish Revenue (akin to todays Minister for Finance), Speaker of the Irish House of Commons, ten times a Lord Justice, with the most important of all being that of “Her Majesty’s Privy Council for Ireland”.

When he passed away ownership of the dwelling on Montpellier Hill up in the Dublin Mountains switched to that of a Richard Parsons who turned it into a Hell Fire Club.

As the First Earl of Rosse and a Freemason, he would have been a well known figure in Ireland at that time and was also known to dabble in Black Magic.

There were numerous such ‘Hell-Fire’ clubs dotted round parts of the UK, they were places were rich people could drink to their hearts content while discussing the issues of the day, and in many of these establishments, dabble in the occult too.

They were very secretive clubs – and you know human nature – when something is kept hidden behind closed doors, people’s inclinations are to presume things of an illicit nature are being carried out.

Thus the popular narrative of the time was that there were satanic acts taking place up on Montpellier Hill, the President and Master of Ceremonies was known as “The King of Hell”, and he dressed in a devil like costume with horns, wings and hooves.

Various tales abound as to apparent slayings of animals and even human servants in rituals said to have taken place to appease Lucifer himself.

One famous story tells of a man turning up unannounced as a card game was in sessions, whereupon he asked to join in.

His large bag of money made the others at the table giddy with excitement and they readily agreed to this stranger joining in on their gambling.

At a certain point in the evening one of the other players accidentally dropped his card, and as he bent down to pick it up he noticed the newly arrived gentleman had cloven hooves instead of feet!

As he drew hurriedly back from the table and shrieking in terror, the Devil proceeded to kill the others in the room and run off with all the money.

A similar tale is told about Loftus Hall in Wexford – In this case it was the owners daughter who spotted the horse feet – a genuine pattern of Devilish appearances or made up lore?

There is another story of a farmer out searching for his sheep stumbling upon a club ‘session’ in progress, where he is invited in and spend the night with them.

Allegedly the farmer was so traumatised by what he saw he was found the next day cowering and shivering like a frightened cat, and from that day on he never again spoke one word, such was the shock he received.

A few years ago Archaeologist’s digging in the area found a passage tomb under the building, and other things such as a 5,000 year old axe-head was also found during their excavations.

To this day the Hell Fire Club is a popular place for walkers to traverse up to, and is also the subject of much controversy to boot.

There are major proposed plans by South Dublin County Council to spend €19m building an interpretative centre and café at Montpellier Hill, which would also see the installation of Treetop Canopy footbridge linking it with Massey’s Wood across the road.

With battle lines drawn on both sides, there is sure to be much discussion at the An Bord Pleanala hearings into the proposed development.

In the meantime why not do as I have done and take a walk up to the Hell Fire building, and with binoculars in tow, marvel at the cityscape below.