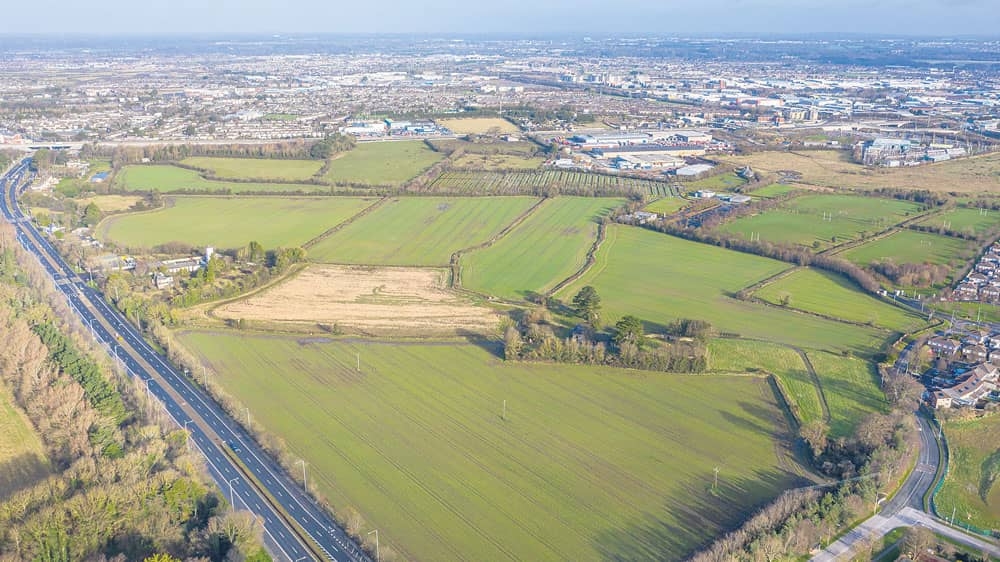 The Newlands Farm site is currently zoned for agricultural uses, however for planning permission to be considered the site would have to be rezoned for residential uses.

The green belt between Kingswood and Clondalkin owned by Hibernia REIT

At the first County Development Plan Meeting today, two motions were passed, resulting in the decision to not rezone the land for residential use.

Hibernia REIT’s plans for the site in Kingswood include the construction of approximately 3,500 residential units at the site, a sports hub and the restoration of Katharine Tynan House. As reported in The Echo last week, further plans for a 41-acre ‘green corridor’ between the site and existing housing developments were announced by the developer.

Rezoning the land at the site has been a topic of contention amongst local councillors and residents since it was announced in February, with the Kingswood Heights Residents Association previously calling the subject site a “vital green lung” and stating that it is “the last green space between Tallaght and Clondalkin.”

“I want to congratulate the Kingswood Resident’s Association and the entire community on a fantastic campaign. We actually changed the mind of one of the proposers of the rezoning and ended up with the motion being overwhelmingly supported.

“We once again have been able to protect the green belt from developers because it is such an important and vital ecological infrastructure for the community of Tallaght and Clondalkin.”

Councillor Teresa Costello, who also had a motion passed to not rezone the land echoed his reaction, saying that it is a really “positive outcome”.

“We never get that type of land again – once it’s gone its gone and we won’t get it back. It was voting for it not to be rezoned – we had a valid debate and I had amazing support from the other councillors.

“We are preserving our green belt and that’s it – it wasn’t the right place for it. It is the first step and next is Katharine Tynan house and getting that up to scratch.”

St Kevin’s Killian’s GAA Club and Kingswood FC, who form the Newlands Farm Kingswood Heights Sports Committee recently asked local councillors to support the rezoning of the Newlands Farm site, as they stated that they were experiencing an “appalling lack of amenities” and supported the Hibernia’s sports development plans.

Cllr King said that these needs must be acknowledged, and councillors will be working with the sports club to try and source them additional facilities to accommodate their needs.

Cllr Costello told The Echo: “I don’t think it was ever about the rezoning for them – they just want amenities, and I can understand that and fully respect it but there are certain things you have to put your heart on and nothing I heard regarding the rezoning sat right with me.

“I don’t know what would have been provided for them, but hopes were raised and the time now to focus on securing St Kevin’s Killian’s with amenities.”

Councillor Charlie O’Connor, who did not support the plans for rezoning said: “I think it was a great result for the community in Kingswood Heights who had campaigned strongly led by the Kingswood Heights Residents Associations.

“We had hundreds of representations, some from those who supported the rezoning. I am getting a lot of positive reactions and the community is pleased and the councillors have delivered what the community wanted.