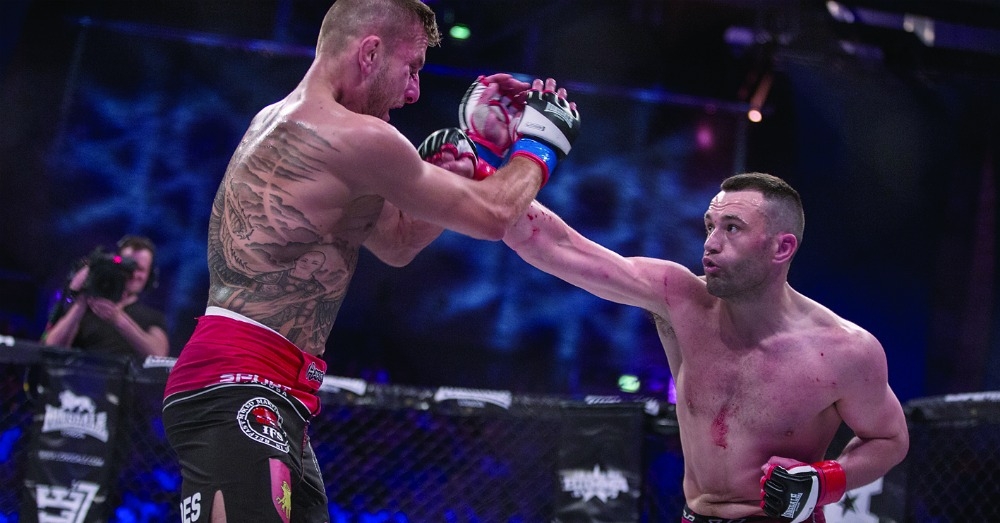 Richie Kiely: “The eye is on me”

TALLAGHT’S Richie Kiely is eyeing up the prospect of a title fight as his next challenge with Lonsdale Welterweight Champion Terry Brazier very much on his radar.

The former Black Panthers kickboxer, was speaking to The Echo in the wake of dishing out another devastating stoppage, this time to Daniel Olejniczak on Friday’s BAMMA 30 bill in the 3 Arena.

After serving up a stunning TKO of Keith McCabe in his MMA debut back in December, Kiely did it again on Friday, unloading a wicked left that sent his Polish opponent to the canvas in the second round before he rained down the blows that finished him off.

“He [Olejniczak] was quite negative. He had his hands up and was keeping it tight, so it was a matter of engaging him and opening him up” explained Kiely..

“I was doing a lot of damage with the jab and he was getting frustrated and he started to open up so it was just about picking him off.”

It is a victory that has catapulted Kiely right in among BAMMA’s headline performers and one that could bring about a much-anticipated show-down with Brazier.

“The eye is on me now” insisted Kiely.

“There are a few options on the table now, but I feel the next one will be a title fight.

“There is no one who has made more of a statement after just two fights. On both occasions I wasn’t the favourite and I delivered two clinical knockouts.

“I mean these were devastating concussive blows. I put McCabe out of action for a while and now Daniel will be on the shelf for a good bit too. They were two top-class prospects and I put them out of action.

“The fight against [Terry] Brazier should be next. There’s nobody else there. He can fight journey men who have dropped one or two fights here and there, but no one like me

“He leads with the chin and if he does that against me it’s going to be a very short night for him.

“This fight makes sense from a business point of view and in terms of entertainment value.

“I have a really distinc-tive style. I fight with my hands down and chin up. It’s a really entertaining style and outside the cage I’m entertaining.

“I don’t just trot out the party line in terms of fighting clichés. Each time I’ve made a statement I’ve backed it up” he stressed.

“I’ve said this before, that people have been trying to pigeon hole me as just a kickboxer.

“But Danny put me up against the cage and I just walked out of there.

“Just because people haven’t see me grapple, doesn’t mean that I can’t do it. I have a kickboxing background and obviously I’m going to fight to my strength.

“But if you try and take me down, you’re going to see just what I can do” he said.