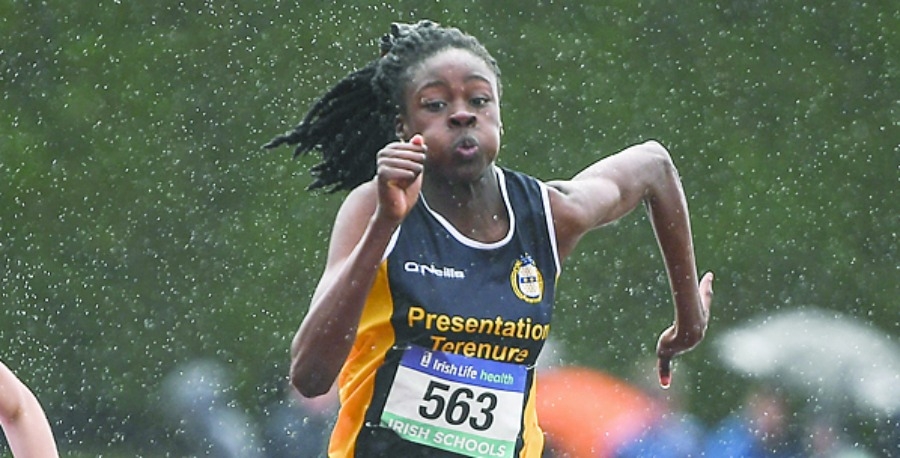 TALLAGHT athletes have been in great form at recent National Championship meets in Tullamore and Athlone.

Last weekend Rhasidat Adeleke continued her brilliant run when winning the Under 16 100m at the National Juvenile Champ-ionships in Tullamore with a new championship best performance of 11.98 seconds.

There was further success for the club when Eoghan Keaney won the Under 18 3000m Steeplechase title with a new PB of 9.55.41.

In the Girls Under 16 3000m Final, Jennifer Mc Adams carded a new personal best time of 10.44.49 that saw her finish just outside the medals in fourth with the top six finishers smashing the previous record which stood at 11.00.5.

Jide Adiguns was another who finished fourth after throwing a new personal best distance of 38.14m in the Under 19 Javelin Final while Lauryn Mc Dermott was seventh in the Under 16 High Jump after clearing 1.50m.

There will again be a lot of Tallaght interest on the last day of these Champ-ionships on Sunday next in Tullamore.

These performances came hot on the heels of Tallaght’s fine showing in the National Junior and Under 23 Championships where Timmy Badu, Shola Edola, Simon Essuman and Joseph Ojewumi combined to win the 4x100m relay final, securing the title for the fifth year in succession for the club with a time of 43.34.

That same day Joseph Ojewumi clocked 10.77 on his way to winning silver in the Junior 100m final while Simon Essuman won his 400m semi-final and finished fifth in the final in a new personal best time of 49.98.

There were further relay successes for the club at the National Juvenile Relay Championships in Athlone where Eoghan Keaney, Conor Barry, Ryan Johnson and Christopher Duffy combined to win the bronze in the Under 18 4x400m final.

NEWER POSTRichie Kiely: “The eye is on me”
OLDER POSTHanrahan and Kabongo strike gold in Tullamore