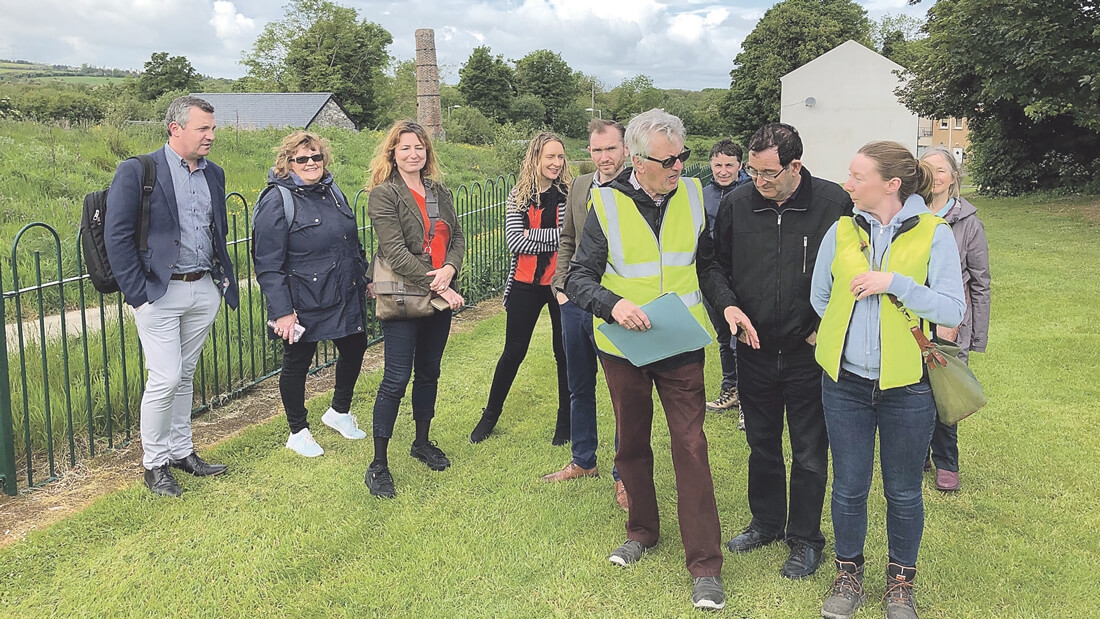 River heritage – a living thing with a past, present and future

All these were considered when the Camac River and Built Heritage Enthusiasts from the Dublin city area were invited by the Saggart Historical Society to tour the site of the Swiftbrook Mill in Saggart village.

The Swiftbrook Mill was powered by the Camac and very high quality paper was produced there, including the paper for Irish bank notes in the past. The Mill is located within a few miles of the source of the river (which appears to lie within a proposed Natural Heritage Area) and the Ecological Status of the river, under the Water Framework Directive and water quality is higher along this stretch of the river, than in the city catchment.

Rivers are increasingly seen as corridors for wildlife and the processes that constitute a natural river is a godsend for biodiversity. The built and natural heritage along the Camac River constitute important features that need to be supported and enhanced in the future.

Dr Niall Colfer, Assistance City Archaeologist from Dublin City Council (DCC), who was among those who visited the site, said: “The tour of the Swiftbrook Mills complex provided a fascinating insight into what was a vibrant industry in Saggart during the 18th and 19th centuries. Of particular interest was where the mill ponds and mills races, which still hold water, diverted from the Camac River.

“Tour guide, Liam Roche, of Saggart Historical Society, was kind enough to identify the location of both the extant and demolished buildings within the mill complex (including the wonderfully restored chimney), and explain that many of the people who worked there still have relatives living in the area.”

Colfer added: “What remains of Swiftbrook Mills provides a vital link to the development of paper-milling and the role it played within the community in west Co. Dublin.”

Dublin City Council has demonstrated its commitment to this heritage with the purchase of the Kilmainham Mill Site late last year and through the work of the DCC Water Framework Directive Office.

The existence of such built and natural heritage features may provide opportunities to support future improvements in river ecology or to explore river-based eco-tourism.

There is an increased public awareness in relation to water, of the value of industrial-built heritage and an appreciation of how healthy rivers can benefit communities balanced by an awareness of the devastation that can be caused by flooding.

Amongst those who toured the site were Ruth Johnson, City Archaeologist, as well as others from the Archaeology, Conservation and Heritage Section of DCC.

Donncha Ó Dúlaing and Darragh Cunningham from DCC Kilmainham Mill Project Team were also there, as was Liam O’Meara from the Inchicore and Kilmainham Heritage Group.