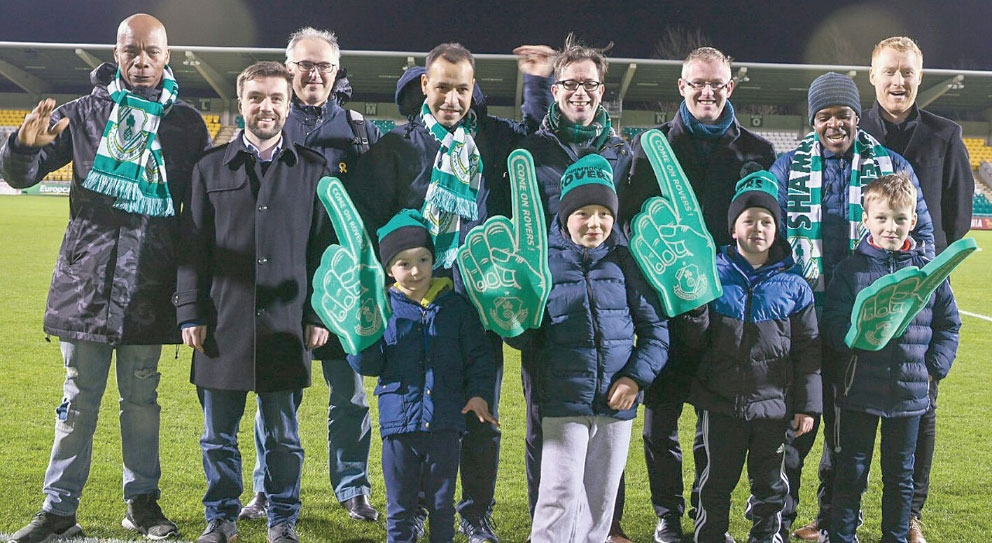 SHAMROCK Rovers Football Club announced last week a local community initiative to bring 30 residents from the Towers Direct Provision Centre in Clondalkin to all of the Hoops home league games at Tallaght Stadium in 2019.

The initiative has been kindly supported by a number of members of the legal profession in Dublin headed by life-long Hoops fans Matthew Kenny of O’Sullivan Kenny Solicitors and Diego Gallagher of Byrne Wallace.

The Hoops kicked off their Airtricity League campaign last Friday away to Waterford and then played their first home fixture in Tallaght Stadium on February 22 against Derry City.

The capacity of Tallaght Stadium will increase this season to 8,000 with the new third stand opening for the first time at the Derry City fixture.

Shamrock Rovers Board Director Mark Lynch said: “We are delighted to announce our latest community initiative which will provide the award winning matchday experience at Tallaght Stadium to residents from the Towers Direct Provision Centre in Clondalkin.

“A group from Towers attended our last home game of the 2018 season and enjoyed it so much we set about to try and make it a season long initiative.

“We have worked with Matthew (Kenny) and ten of his colleagues who have all donated funds to subsidise the project which will provide free transport, snack packs and Junior Hoops membership for all 30 matchday goers.

“The club will provide up to 30 complimentary match tickets for all home league games in the new season which will begin on 22nd February and will manage all logistics involved.”

The driving force behind the initiative for the group of solicitors and barristers is Matthew Kenny of O’Sullivan Kenny Solicitors, he said: “Sport plays a positive role in developing links between communities in Ireland. We wanted to ensure that the new Irish have the same opportunity as the rest of our community to watch Irish football on a Friday night.”

Adding to this Mark Lynch said: “There will be a minibus service provided each matchday to collect the residents at Towers and return them post-match. Each guest will receive a ‘snack pack’ and over the course of the season there will be additional elements like being part of the Guard of Honour welcoming the teams on to the pitch and being part of the Junior Hoops, the younger fans can join in, get to meet other boys and girls of their age and hopefully make some good friendships.”

Speaking on behalf of Towers Direct Provision Centre Residents, Hicham Lamchaali said: “For me and other residents it is very important to have an opportunity to meet and integrate with Irish people – we look forward to coming to Shamrock Rovers and making many new friends and shouting-on the Hoops.”