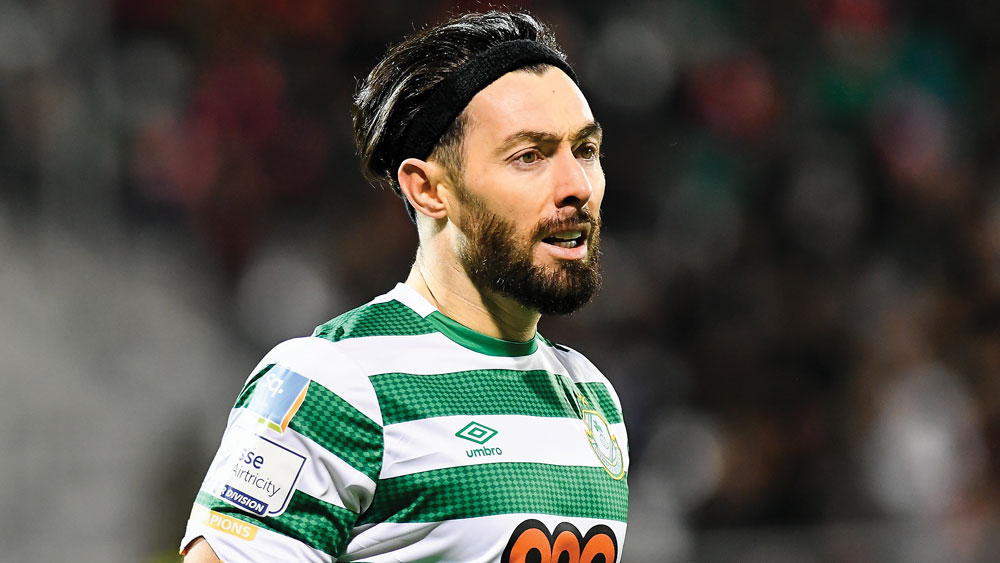 Richie Towell lined out for the Hoops this evening

Shamrock Rovers will have it all to do in Tallaght next week after falling to a 3-0 defeat against Ludogorets in Razgrad this evening in the opening leg of the UEFA Champions League second qualifying round.

Thanks to a brace of goals by Pieros Sotiriou, the Bulgarian side brought a 2-0 cushion into the interval and added further gloss to the scoreline with a late contribution from Igor Thiago.

Rovers had initially acquitted themselves quite well with lone striker Rory Gaffney holding the ball up to good effect at times. However, the hosts eventually hit top gear and took the lead with 25 minutes gone on the clock.

From a Cauly delivery on the right-flank, Cypriot striker Sotiriou headed past Rovers netminder Alan Mannus. Sotiriou has won seven league titles in his career to date and he doubled his tally in the 35th-minute of the action.

Despite Lee Grace brilliantly blocking an effort by Brazilian forward Rick on the goal line, Sotiriou was on hand to lash home the rebound.

This left the Hoops with a mountain to climb when the play resumed, though Dylan Watts – one of Rovers’ best performers in recent weeks – had a strike on goal in the third-quarter that marginally cleared the crossbar.

Watts later made way for Graham Burke, who certainly had a good impact for the visitors in the final-third.

Team captain Ronan Finn was also subsequently withdrawn on what was his 50th European appearance across two spells with Rovers as well as one each at Sporting Fingal and Dundalk.

A two-goal deficit would have offered Rovers a fighting chance ahead of the return leg, but Thiago’s stoppage-time finish – which took a wicked deflection off Sean Hoare – ensures Ludogorets have one foot in the next phase of qualification.