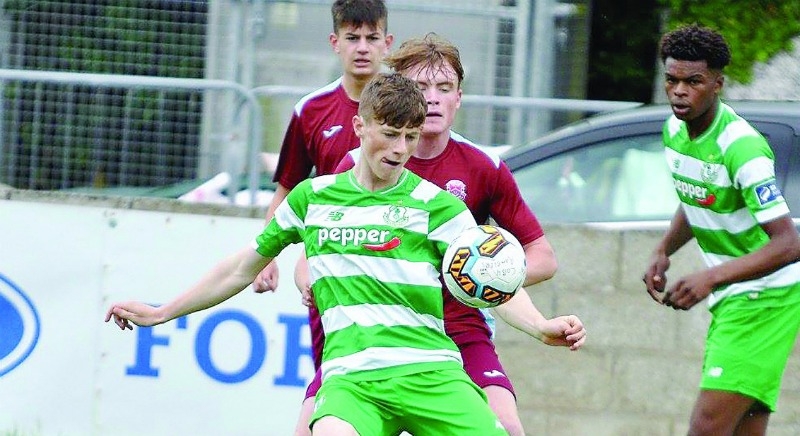 SHAMROCK Rovers Under-17s are flying high in second place in the Under-17 Southern Elite Division, despite their first defeat of the season against Cobh Ramblers.

After 12 games the Hoops have racked up eight wins, three draws and a solitary loss, and have 27 points in the bag.

After seeing off the challenge of Cabinteely 2-1, The Under-17s headed down the M7 to Cobh the following Saturday to face off against a team they comprehensively beat 7-0 in the first series of games.

Thus confidence was high that they could notch up another victory on their travels.

But sadly it was not to be, as the Cork side showed a lot of composure and patience on the ball to grind out a 3-1 win by the final whistle.

Despite this setback, the Hoops are currently just a solitary point behind table-topping Waterford in second place.

But disaster struck for the Hoops as, very much against the run of play, Cameron Harelson found space to run down the wing, and his low cross was met by Benion O’Brien Whitmarsh, who rifled it into the back of the net.

The away side were very unlucky not to have levelled matters in the 39th minute, when a Kenny Cunningham strike bounced back off the crossbar, only to be cleared by a much-relieved Cobh defence.

Thus Rovers went in at the break trailing 1-0.

Rovers deservedly got an equaliser on the 64th minute, with Conor Behan almost bursting the net with his close-range shot.

But the Hoops seemed to awaken Cobh Ramblers, who suddenly found an extra gear, and began to take control of the game.

So it only took eight minutes for the resultant home-side pressure to bear fruit, as O’Brien Whitmarsh cut in from the right, and put the ball beyond the reach of Gavin Bazunu in the Shamrock Rovers goal, to score his second of the game.

With the Tallaght side throwing everything into attack as they chased an equaliser, they were leaving themselves vulnerable to the counter attack, and this proved to be their undoing.

Once again against the run of play, the away side found themselves badly outnumbered at the back, as O’Brien Whitmarsh slotted the ball home at the second time of asking to record his hat trick.

Despite this setback, team are flying high overall, and still well in contention to win their division.

With Republic of Ireland Under-17 International Aaron Bolger in flying form, they are a match for any team on their day.

Next up for Rovers is another trip to Cork, where they play Cork City in their latest fixture in the Southern Elite Division.