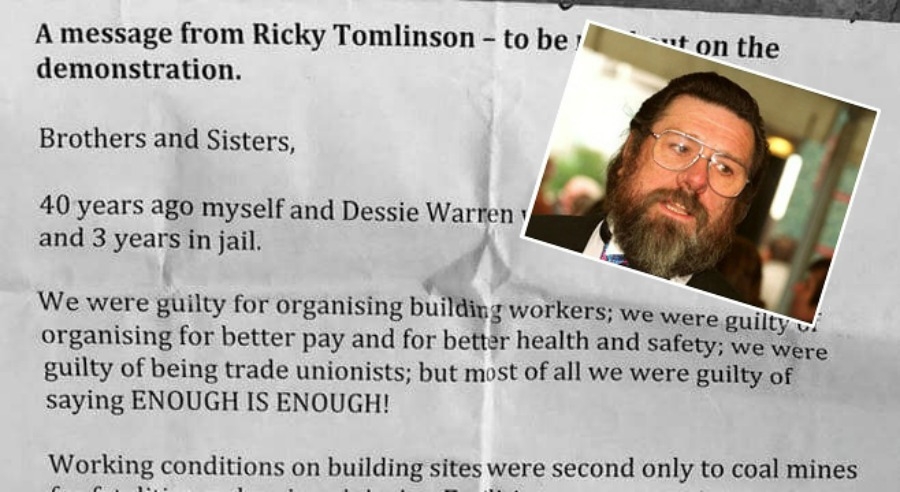 Several hundred people took to the streets of Dublin yesterday to show their support for a 17-year-old teenager found guilty of falsely imprisoning Joan Burton in Jobstown in 2014.

On Friday, in the Children’s Court in Smithfield, the teenager was discharged conditionally on good behaviour for nine months by the judge.

Yesterday’s march began at the Central Bank, with protestors moving through the streets and finishing in Smithfield.

Many spoke at the rally, and Royle Family actor Ricky Tomlinson sent a letter of support, which was read out at the Central Bank.

Tomlinson was himself jailed during a builders workers’ dispute in 1973, along with his friend Dessie Warren, and his letter explained his own experience, while it also condemned the guilty verdict handed down to the 17-year-old teenager on Friday.

“40 years ago myself and Dessie Warren were sentenced to 2 years and 3 years in jail.

“Working conditions on building sites were second only to coal mines for fatalities and serious injuries.

“Facilities were non-existent, no toilets or wash basins. Pay was terrible £20 per week for a skilled worker and £17 for labourers, this for a 40 hour week.

“But the bosses and the Tories came after us and used the law to punish us and to punish other building workers – but we stood strong.

“It is an absolute insult to find that a politician trapped in the comfort of (a) car is deemed to be in prison. As Jim Royle would say – “Imprisonment my arse!”

“I want to send greetings to the people of Jobstown for standing up against water charges – it is better to break the law than to break the poor.