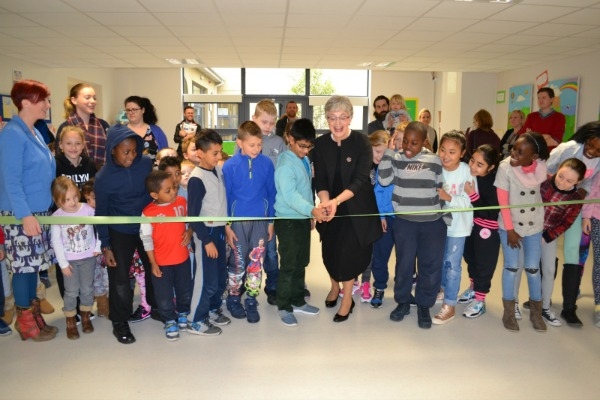 CHILDREN in Citywest Educate Together National School recently presented Minister Katherine Zappone with lobbying letters and artwork, which campaign for the construction of a secondary school in their community.

As reported in The Echo last May, there will be close to 1,900 primary school kids attending the four national schools in the Citywest and Saggart areas within the next three years – but no secondary school.

While families have welcomed the new national schools, concerns have been raised over the absence of a secondary school – with post-primary students currently living in the area forced to leave their community, and their friends, for second-level education.

Last Friday, November 11, the Minister for Children and Youth Affairs, Katherine Zappone TD, visited Citywest Educate Together to open three new classrooms – alongside meeting with the student council, which presented the Minister with lobbying letters for a secondary school.

Minister Zappone said: “I am delighted to open these new classrooms and meet the children and staff here in Citywest Educate Together National School.

“I will pass on these wonderful letters and art work, which express the children’s need to continue their learning with their friends locally in Citywest through a second-level Educate Together, to my cabinet colleague, Minister Bruton.”

Principal Caitríona Hand said: “We were delighted to have Minister Zappone open three new class rooms to meet the increasing demand for places in Citywest Educate Together National School.

According to Dave Murphy, Chairperson, Citywest Educate Together Second-Level Campaign Group: “We cannot understand why the Department of Education and Minister Bruton have not moved on this yet. We are in dire need of a second-level school here in Citywest.

“All we need is the green light from the Department of Education.

“We have the demand, we have four feeder national schools, we have the location in the local area plans, but we have no school.”

Minister Zappone is due to pass on the letters and art work from the children to her cabinet colleague and Minister for Education, Richard Bruton.

For more on the campaign visit the Citywest Educate Together 2nd Level Campaign Facebook page or www.citywestetns.ie