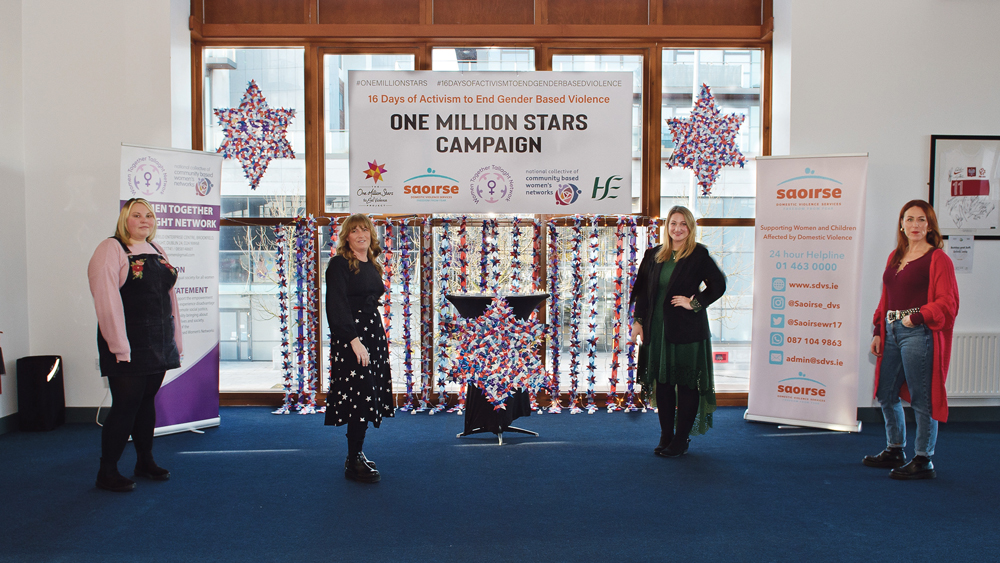 SOME 509 stars were created by local community groups to shine a light on the 509 women and children who engaged with Saoirse Domestic Violence Services in 2020, writes Mary Dennehy.

Last Friday, December 10, marked the final day of 16 Days of Action, a global campaign that aims to raise awareness around gender-based violence.

This year, 16 Days of Action included the One Million Stars Campaign, with Saoirse and Women Together Tallaght Network joining forces to support the weaving of 509 stars locally by groups and organisations.

Sinead Mahon, co-ordinator of Women Together Tallaght Network, said: “We wanted to bring the national One Million Stars Campaign to the local area.

“It was powerful activism through the art of weaving, an inclusive community project to coordinate during the times we are in. Saoirse Domestic Violence Services supported 509 women and children in 2020 during the pandemic.

“We asked our community of Tallaght and beyond to help us to reach 509 stars to represent the woman and children who engaged with Saoirse Domestic Violence Services in 2020”.

According to Sinead, the campaign gave groups, participants and families an opportunity to have a conversation about domestic violence and relationships, healthy and unhealthy.

It also helped raise awareness of the “invaluable work” Saoirse carries out within the community and the services it offers.

Sinead also thanked the groups that weaved stars, from resource and community centres to schools and local services.

She also thanked South Dublin County Council and Tallaght Stadium for providing the space for the Star installation to be displayed.

“Working together like tiny stars that light the universe, that’s the power of a community,” Sinead said.

Speaking at the virtual event on December 10, Amanda Alty, the Dublin 10 Outreach Worker for Saoirse, said that throughout the 16 days of Action, the domestic violence service sought to “draw the curtains on domestic abuse and gender-based violence”.

“In weaving these stars and displaying them, we aim to not only shed light on the vast impact of domestic abuse, but also express to survivors that we as a community will stand in solidarity to listen, believe, and advocate for their safety,” Amanda said.

“The stars are woven with the colours of both Saoirse Domestic Violence Services and NCCWN Women Together Tallaght Network, a partnership that was established 5 years ago.

“Our hope is that this light we shine on the issue of domestic abuse will not fade away but will continue to shine brighter throughout our community.”

The installation at Tallaght Stadium also included 115 fairy doors, which represented the 115 children living in Saoirse’s crisis refuge accommodation in 2020.

According to information provided to The Echo on the fairy doors, Saoirse said: “Children are often unseen in society when we think about family violence and its effects.

“This year the childcare team has decided to use fairy doors to represent this statistic as like fairies, children are often invisible.

“Our fairy doors not only represent the hidden nature of domestic violence they also represent the need for stability and a safe space for children.”

Saoirse Domestic Violence Services’ helpline is 24/7 and will continue to operate over the Christmas and New Year period.

Call the helpline on 01 4630000. For further information on Saoirse Domestic Violence Services visit sdvs.ie or follow them on social media.