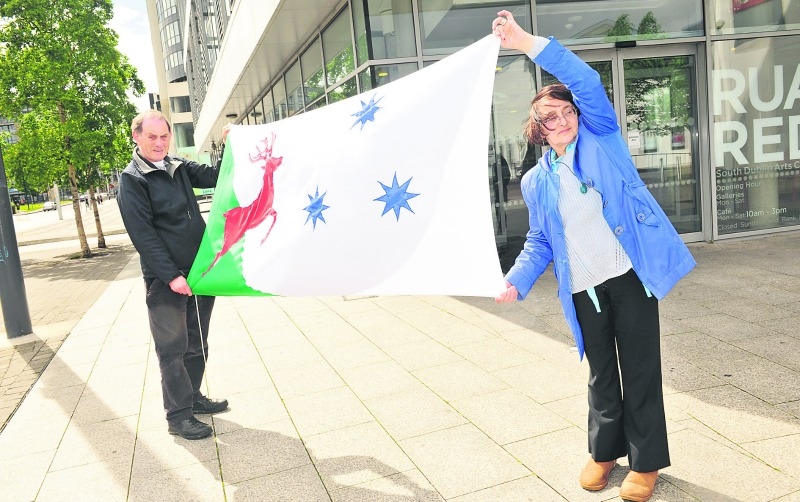 Say hello to Tallaght’s very own ‘inclusive and inspirational’ flag

AFTER more than ten years of research and community collaboration, Tallaght has its own flag – which representing the area’s past, present and future is an ‘inclusive and inspirational’ symbol for all.

Springfield resident Joe Cullen has been working on and researching the elements that should appear on a Tallaght flag for more than ten years, during which time he collaborated with a number of residents and community groups.

A member of the Tallaght Historical Society, which commissioned the flag to be printed onto cloth, Joe believes that the flag will be a “symbol of identity” for the area – with the flag flying with three blue, eight-pointed, stars, a red deer and incorporating the colours white and green.

Joe told The Echo that during his research he learned that people associated the colours red, green, white and blue with Tallaght, in that order.

“I’m not sure why red is the colour that came to most people’s mind when I asked them what colour they associated with the area,” Joe said.

“Maybe it’s because The Square is a red-brick building and subconsciously we think red. I’m not sure.

“We used the colour red for the deer, which is a tie both to the mythology of the area and the different civilisations that have lived in Tallaght.

“The deer is also an echo of the natural environment, with Tallaght’s natural hinterland also represented in the green [strip].”

Explaining the three blue stars, Joe said that they point back to the flag flown during the Battle of Tallaght in 1867.

“This was a Fenian flag and had 32 eight-pointed stars. We changed the colour of the stars to blue and used three to represent the area’s past, present and future.”

The flag will officially fly for the first time at Tallafest in Tallaght village on June 24.

“I think the flag is quite important, especially as it was developed in consultation with different groups in the area,” Joe said.
“It was a grassroots [project] to find a cultural symbol for Tallaght and there are no elements that are divisive or exclusive.

“The flag is inclusive and a symbol of identity . . . and is hopefully something that people can look up to and be inspired by.”