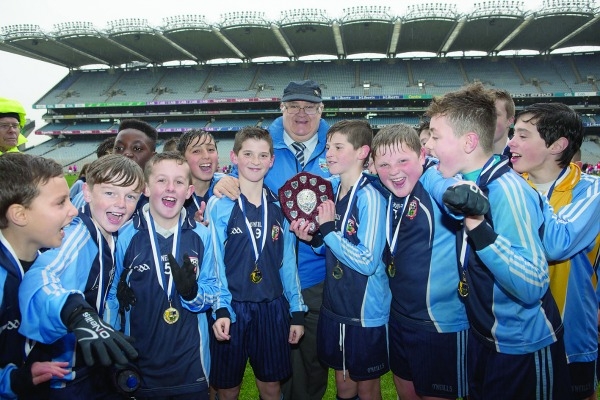 TWO YEARS after they had fallen in the final of the Corn Matt Griffin, Scoil Aonghusa SNS returned to Croke Park to take that one last step in the competition, beating local rivals Scoil Santain 3-2 to 0-3 in the decider on Tuesday.

Three goals from John Olaonipekun effectively won the match for the Balrothery side who were bolstered also by other superb performers on the day.

Luke Burke contributed from the dead ball while at the other end of the pitch full back Sleman Razi mopped up much of the Scoil Santain attack.

The runners-up kept fighting to the end with Callum O Buaigh and Tomas O Mordha on the scoresheet for them while Danielle Breathanach at half forward and Warren O Meallain at centre half back were in fine form.

Aonghusa, however, enjoyed a great start to the match when Olaonipekun got on the end of a high ball that was knocked down by Sebastian Sweeney before tucking it away after which Burke pointed from a free.

Scoil Santain responded with a couple of points only to see Olaonipekun use his pace to race on to a breaking ball and shoot to the back of the net before the halftime break.

Burke was again on target with a free early in the second half of the match and the victory was effectively secured when Darragh Byrne’s high ball injected some panic in the Santain defence and Olaonipekun pounced for his hat-trick.