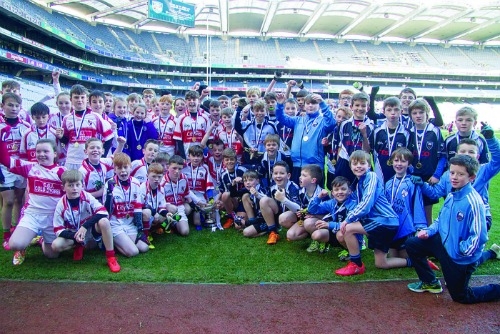 GAELSCOIL Inse Chor and Scoil Chronain played out a thrilling 3-9 to 3-9 draw in the Cumann na mBunscol Corn An Cheid final in Croke Park on Wednesday.

This was one of the highlights of the Cumann na mBunscol finals as the teans exchanged scores in what was a thrilling encounter.

Iwan MacRoibeard and Elliott Lupton both bagged a goal each for the Inchicore outfit while Harry O Laochog also netted a fine goal.

Scoil Chronain midfield-er Jamie MacCearrbhaill scored one of the points of the game from the sideline while captain Darragh O Bradaigh and Diarmuid O Dulaing impressed.

However it took two points from Inse Chor to secure a draw in what was an impressive show for the winners.