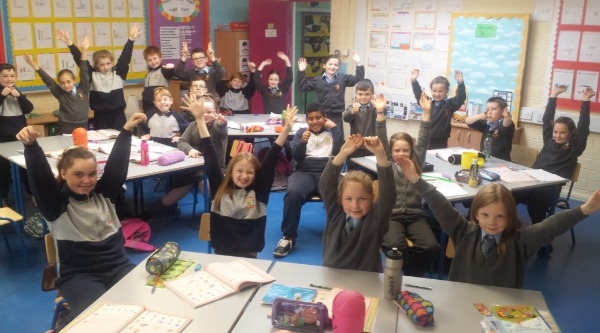 Fourth class students from Scoil Aonghusa in Tymon North were today announced as the winners of the 2015 ReelLife SCIENCE Schools Video Competition.

Supported by the Science Foundation Ireland Discover programme and the CÚRAM Centre for Research in Medical Devices, ReelLIFE SCIENCE challenged Irish primary and secondary schools to make short videos, which would entertain and educate people, on a range of scientific topics.

The challenge, with a total prizefund of €3000, was met by more than 1,200 students and teachers in 77 schools around Ireland, producing over 120 science videos in both English and Irish.

The video, a news report live from Tallaght’s first manned rocket launch, was described by Cmdr. Hadfield as “fun” and “well-acted”, while Prof. McLysaght praised the “humour interspersed with the science,” remarking that “This video is great fun and I think the pupils had fun making it too!”

Speaking about the competition, Special Guest Judge Commander Chris Hadfield said “Discovery and creativity, turned loose by imagination. A great project that I am proud to be a part of.”

The video below will be shown to the general public as part of the Galway Science and Technology Exhibition, held in NUI Galway on Sunday, 22 November. The videos are also on display during Science Week in the Galway City Museum (Tues -Thurs) and Galway Film Centre.