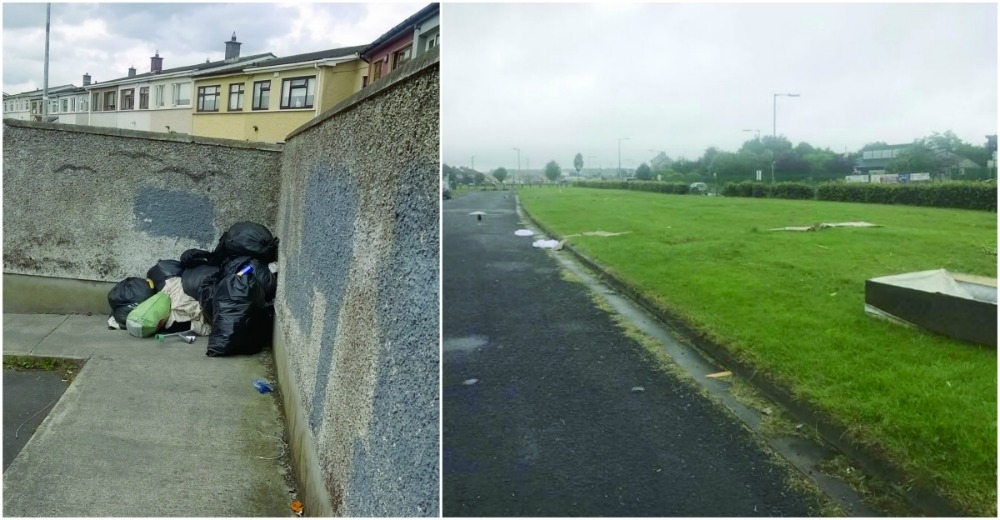 MORE than €420,000 has been spent by South Dublin County Council on the removal of illegal waste in the first six months of this year, with 1,604 complaints around illegal dumping being received by the local authority in the same period.

The growing issue of illegal dumping is eating away at local communities and the council’s budget, with money which should be spent on the enhancement of estates being directed into removing rubbish dumped in neighbourhoods and local scenic spots.

While consistently raised by councillors and residents, illegal dumping continues to scar the landscape of South Dublin County Council, despite the region being home to a very pro-active network of residents, environment groups and Tidy Towns committees who volunteer hundreds of hours each week cleaning and enhancing their area.

Recent figures released show how illegal dumping cost the council almost €2.7m in 2015 and 2016, with more than €420k directed into the removal of illegal waste across communities in the first six months of this year.

So far this year, 203 fines have also being issued and 1,604 complaints received by members of the public.

The manpower and money redirected into illegal dumping is placing a huge cost to the council, with pressure placed on the local authority only this week to remove illegal dumping in Maplewood Park in Springfield – where residents have requested ‘No Litter’ signs to try and deter serial dumpers from destroying their estate.

In the nearby estate of Brookfield, illegal dumping is also having a huge impact on the area, despite the ongoing efforts of residents and the council to alleviate the issue.

Sinn Féin councillor Louise Dunne told The Echo: “Since the Gateway workers left the council, the volume of illegal dumping in all estates has become a reality.

“The council is doing what it can and residents are constantly out picking up rubbish, but we just can’t keep on top of the level of dumping going on.

“It’s horrendous and if you take Brookfield, for example, the playgrounds, greenspaces and playing pitches are being destroyed and impacting on everybody’s quality of life.

“It’s also sad for the kids. The schools in Brookfield are green flag schools and they work hard with kids to educate them on caring for the environment and not littering.

“However, they leave school and are faced with bags of rubbish dumped in their estate.”

She added: “The dumping is pretty blatant and it’s a very small minority responsible for it, some of whom have come to attention of residents and the council.

“The system needs to change at national level. Councils need more power in relation to enforcement because at the moment nothing is working.

“I really find it hard to understand why people can’t work out some system to pay for their rubbish, I pay €3 per week for my rubbish and I think that’s pretty affordable for [the majority of households].”

According to Nicola Lawler of the council’s environment department: “South Dublin County Council is committed to improving the aesthetic appearance of our county.

“Some of the main measures that the council is taking in order to prevent illegal dumping are increased usage of technology, i.e. CCTV systems in various black spots, installation of audio devices and employment of drones for surveillance.

“A team of five Litter Wardens patrol the county on a daily basis, investigating all complaints and enforcing regulation and legislation as appropriate.”