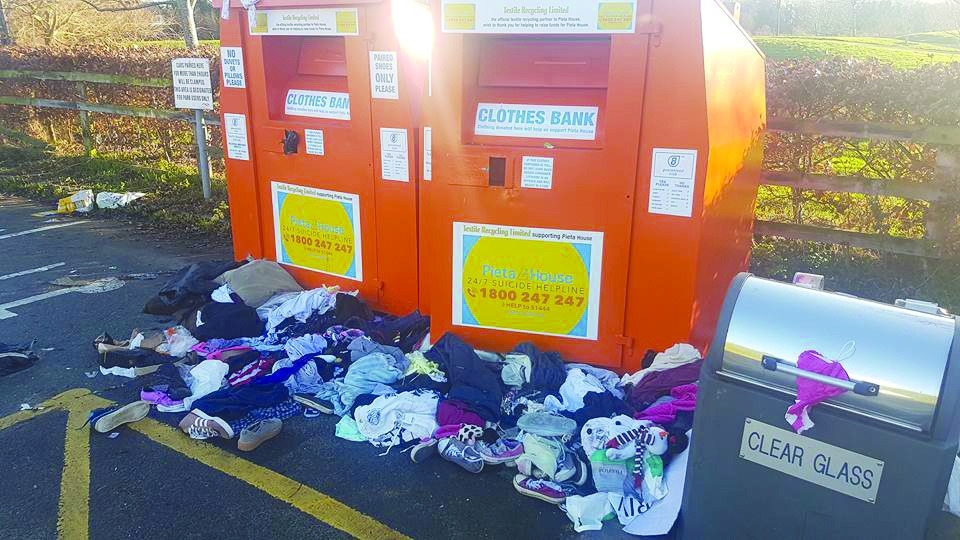 THE recycling centre at Sean Walsh Park is set for a make-over after South Dublin County Council secured a €5,000 grant earmarked for a clean-up operation and the introduction of signage and audio monitoring devices.

The “poor condition” of the bring banks at the local park has been on the radar of residents, campaign groups and local politicians for some time now, with the area which lies close to the entrance of Tallaght Stadium, being weighed down by illegal dumping.

There are also issues around what is described as ‘clothes overspill’, which happens when bags of clothes too large for the textile recycling bin are dropped on the ground beside the container.

The Echo has this week learned that the council applied for funding through the 2017 Anti-Dumping Initiative and was successful in securing a €5,000 grant for improvement and deterrent works at Sean Walsh Park.

According to Mary Maguire, of the council’s parks department, the grant will be used for a clean-up operation and to provide signage and audio monitoring devices at the bottle banks – which is hoped will deter illegal dumping.

When asked about the clean-up, Ms Maguire told The Echo: “Part of the works will include the removal of can and textile banks from this site, as it appears that the county is covered by textile recycling points, both on public and private property, and cans can be disposed of in the household green bin.

“We also intend to examine the possibility of removing the three over-ground access chutes, which are items that look like litter bins but which are in fact access points to an underground recycling facility which was installed 10 or more years ago but went out of service soon after due to technical problems.

“It is also proposed to repaint the remaining bottle banks.”

Tara De Buitléar, PRO of Tallaght Community Council (TCC), which suggested that the bins be totally removed from the park as it’s the start of the Dublin Mountain Trail, said: “In the absence of a current appetite to relocate these [bins] out of Sean Walsh Park – we are asking that they be moved from their current hidden location in the car park.”

Commenting on the audio devices, she said: “We believe cameras which could very easily capture the registrations of all cars accessing the bottle banks would be a better use of funds and certainly more effective than a repeat audio message with no enforcement follow-up possible at this location.”

TCC, which has also requested more bins along the walkways within the park, is hoping to have a meeting with the council before works start and are completed in mid-September.