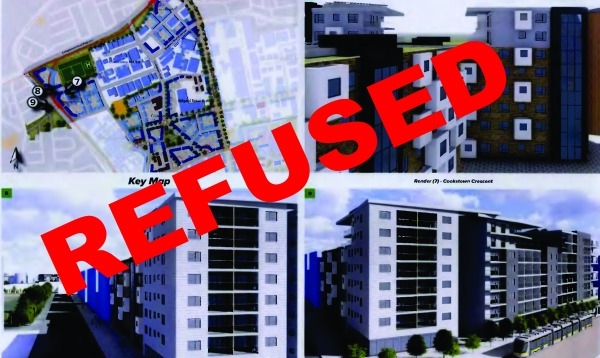 As previously reported in The Echo, two planning applications for that were lodged as part of the Cookstown Regeneration and were refused permission by South Dublin County Council last week, but details of the decision were unavailable in time for print.

In its decision to refuse permission, the council said that the concerns with the proposed development would not be sufficiently covered by way of additional information, and that the applications would have to be refused.

A failure on the applicant to show that the development would not have a negative impact on the Luas was also listed as a reason, along with the size of the proposed apartments failing to meet the Sustainable Urban Housing guidelines.

The access road to one of the sites via Exchange Hall was also listed as a reason for refusal due to the ownership of the lands and the proximity of the access to Exchange Hall.

The lack of available frontage and overdevelopment of one of the sites was also given as a reason.

“In addition, it has not been demonstrated that the schools in the area can cope with the additional demand such a development would place on their services.

“In its current form, the proposed residential development would therefore represent a substandard form of development and would seriously injure the amenities of the area.”