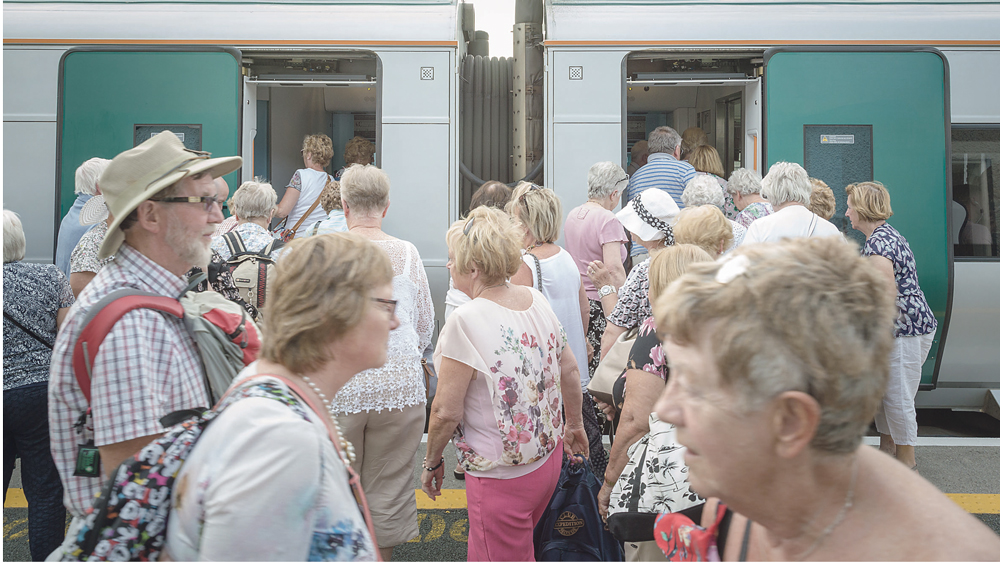 A TALLAGHT active-age retirement group is the subject of a new outdoor multimedia exhibition that will be held at Rua Red and the Civic Theatre on Culture Night this Friday, September 17, from 6pm.

The Have Pass Will Travel group, which the exhibition is named after, is based in St Mary’s Priory in Tallaght village. The members go on monthly trips around the country, armed with their free travel passes.

Architectural and performance photographer Ste Murray went with the group on their monthly outings throughout 2018 and 2019, and captured images and multimedia footage that is set to be exhibited for the first time on Culture Night.

Explaining how the project came about, Ste, who grew up in Bancroft and is a past pupil of Coláiste de híde, told The Echo: “I work as a commercial photographer, and I’d get commissions from arts organisations, theatres, bands and musicians.

“I love doing that work, but I’m always looking for personal projects with a little more depth that I can put more time into.”

In Easter 2017, Ste was in Molloys in Tallaght village talking to a friend about how he wanted to find a personal project to develop.

His friend suggested an active retirement travel group that her father was in, called Have Pass Will Travel, and after reaching out to them and his idea being positively received, Ste soon became a part of the fold.

“I started going on their trips,” explained Ste. “What I liked about it was that they had a structure to it.

“They pick a place to go to every month. In summer they go on longer journeys around the country, because the days are longer, and in winter they go to places in town.”

He added: “I went travelling with them for two years in the end. When I started, I was a bit of an outsider, but they took me along as one of their own by the end.”

The group has over 70 members, all aged over 65, and Ste quickly gained their trust. None of the photos he took during his time with the group were staged.

Instead, Ste tended to stay in the background and observe the group in order to capture images of them without them being influenced by his presence as a photographer.

“The group itself has its own narrative,” said Ste.

“With this project, it was about stepping back and trying to be honest, and not patronise them.

“With projects about older people, people tend to infantilise them, and I didn’t want to do that.”

Ste captured a variety of images, both still and moving, that will be projected onto the windows of Rua Red, the Civic Theatre and Tallaght Library on Friday.

“It will still be like when you walk into a gallery,” said Ste, “where you can choose the pieces you want to look at, and if you want to go around it clockwise or in a zig-zag.

“I like the idea that people can go up to the four different projections, and piece it together themselves.

“The exhibition is a celebration of this group, of these people, and of the human spirit.”

The free ‘Have Pass Will Travel’ exhibition will take place from 6pm to 10pm on Friday, and visitors are advised to bring headphones so they can listen to the audio pieces that accompany the projections.

For a full list of Culture Night events, visit www.culturenight.ie.

For events in Tallaght’s Cultural Quarter – which is between Rua Red, the Civic Theatre and Tallaght Library – visit www.ruared.ie and www.civictheatre.ie.