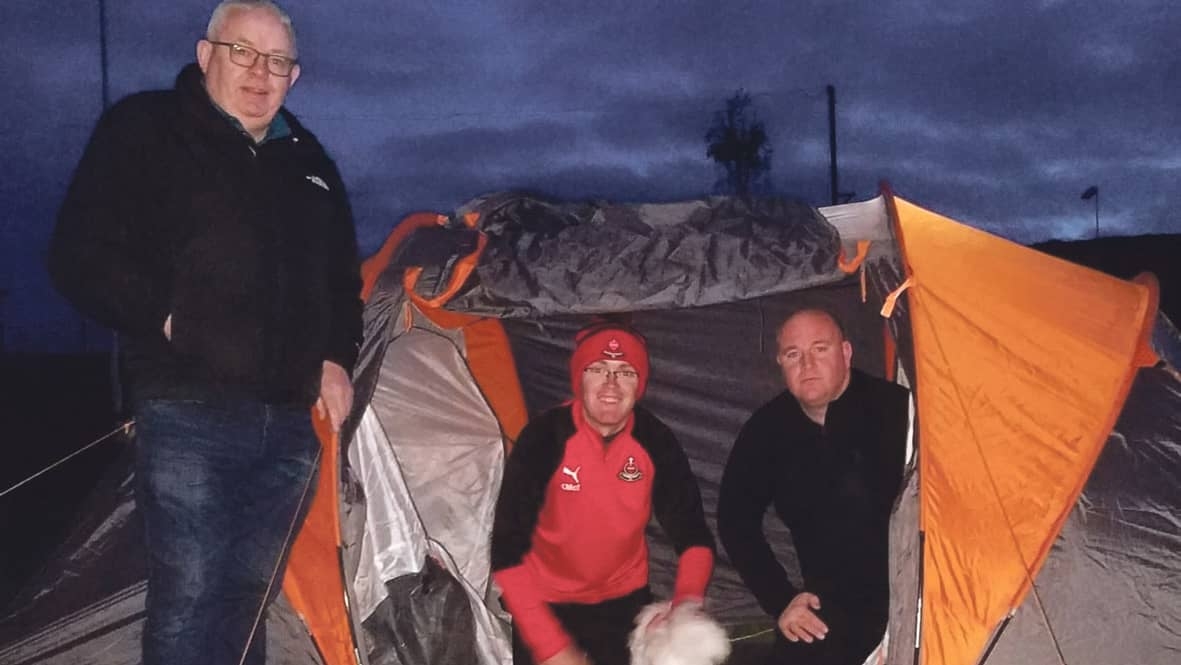 Sleep out to raise funds for A Helping Hand charity

MEMBERS of Sacred Heart Football Club in Killinarden are sleeping in tents on the club’s pitches to raise funds for A Helping Hand – a Tallaght-based charity that provides food hampers to local families in need.

A Helping Hand was founded by Sinn Féin councillor Dermot Richardson in 2018, and it also provides the annual Christmas Day dinner for the homeless in Tallaght Adventure World.

However, the dinner has been cancelled as a result of the pandemic and this year the community group will instead focus on providing food hampers to tide people over during the festive season.

Sacred Heart FC’s U9s coach and U15s head coach Kieran McDonagh heard about this and decided to bring the idea of a sleep out fundraiser for A Helping Hand to the club, which received an enthusiastic response, as a parent of one the club’s players and one of the club’s managers decided to take part.

Kieran has raised €900 to date as a result of the sleep out that he undertook last Friday alongside Brian McDermott, whose son plays for the club’s U12s team.

“I knew there was a similar fundraiser being held for Focus Ireland,” Kieran told The Echo, “but I knew a lot of other groups and youth clubs were doing that fundraiser for them.

“So we decided to do it for Dermot Richardson’s A Helping Hand instead, because it helps people in the local area.

“Everyone in the club was happy to lend a hand and do their bit.”

Kieran and Brian completed their sleep out challenge last week, while next week the club’s U14s manager, Tommy Kelly, will sleep out for three nights on the club’s pitch to encourage more people to donate to the cause.

“Last year 320 families got Christmas dinner from A Helping Hand, and our aim is to raise enough so there will be 300-400 hampers for them this Christmas, and we’d like to include vouchers for places like Smyths in them too.”

To get the Revolut number to donate to the cause, contact Kieran via the Sacred Heart FC Facebook page.

NEWER POSTRestrictions to cause difficulties and challenges at Halloween
OLDER POST€50,000 agreed to be spent on fencing to protect skate park