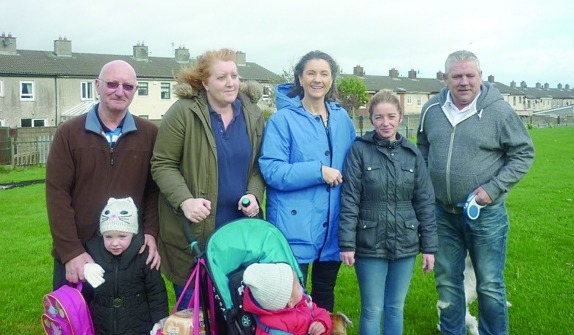 THE pressure that the housing crisis is putting on local authorities was heard loud and clear on Monday, when councillors came face to face with a group of angry Tallaght residents who have had their fill of social housing in their community.

An infill housing development of 26 houses in Killinarden Estate was up before South Dublin County Council for a vote on Monday, a process which saw the public gallery thronged with frustrated residents, many of whom have been living in Killinarden since it was built.

Due to the housing crisis and a need for social housing, the council is currently identifying locations across the county for infill housing developments.

However, concerns have been raised in recent months by both councillors and residents over the location of these infill developments, which, to date, have primarily been planned for green spaces in already built-up estates in West Tallaght and Clondalkin.

The latest proposal up was a 26-unit infill development on land in Killinarden estate, a proposal which was redesigned after initial consultation with residents highlighted a number of issues.

Rathfarnham Fine Gael councillor Anne-Marie Dermody felt the heat from fellow councillors during the two-hour discussion, when she spoke out against the proposed development, which she believes could be open to “Judicial Review” due to the absence of a public notice on the day she visited the site.

She also said that Killinarden is located in an area prone to flooding and that the Fisheries Board should have been notified of the proposed plans.

She said: “I am not against social housing but the Part 8 [consultation stage] has not been carried out to the letter of the law, in my opinion.

“I am representing the views of 63 residents in Killinarden and the council owes a duty of care to them when it comes to building on their open space.”

Cllr Dermody was accused by a number of her fellow councillors of “electioneering”, “undermining the role” of the six Tallaght South representatives, and coming between the community and the council.

Tallaght South Sinn Féin councillors Cathal King and Louise Dunne both expressed their disappointment that a councillor sitting outside of Tallaght was the only public representative at a meeting with residents, and that Cllr Dermody did not feel the need to discuss the proposal with councillors representing the area.

Cllr King said: “Bogus information on this project was given to the residents of Killinarden and I for one, saw the site notice erected – I have a picture of it on my phone.

“I’m wondering is Cllr Dermody [who is a practicing solicitor] is speaking here with her solicitor hat on or her councillor hat, and is there a conflict of interest here?

“The council’s architect department put a lot of effort into changing these plans in line with the views and concerns of residents, and it is disheartening that no residents, based on advice from someone, did not show up at the second consultation meeting.”

He added: “It is with a heavy heart that I vote in favour of this development, but my decision is taken against the huge housing crisis that we have here in Tallaght and across the county.

“However, I believe that there should be a better spread of infill housing right across the county and will be keeping the pressure on that sites are found in Rathfarnham and Templeogue.”

All six Tallaght South councillors expressed their support for the community of Killinarden, but said that against the backdrop of the housing crisis they were voting in favour of the development, which many believe addresses the initial concerns of residents.

The proposed development was passed, with only Cllr Dermody voting against it – but not before residents in the gallery accused the council of creating a “concrete jungle” in Killinarden, and branding councillors “traitors”, “a disgrace” and “liars”.

A number of people in the public gallery were removed by security before the vote took place.