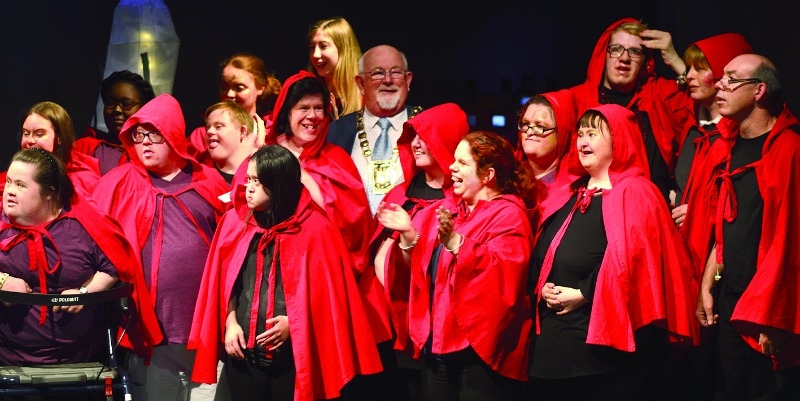 A LOCAL theatre ensemble for adults living with disabilities performed their production of ‘Can’t See the Wood for the Trees’ to a sold-out audience in Rua Red’s performance space this month.

‘Can’t See the Wood for the Trees’ is a modern day reimagining of Little Red Riding Hood that looks at issues including care, independence and the prevailing presence of media in our lives.

The Doors to Elsewhere Ensemble spent months devising and rehearsing for their performance, and they were joined by guest artist Mateusz Szczerek who played the role of The Wolf in Coisceim Dance Theatre’s ‘The Wolf and Peter’ in the Civic Theatre last April.

“This production is a significant development for the group,” said Tony Fegan, director of Tallaght Community Arts.

“The combination of dance and video, allied with a specially designed set of illuminated trees and costumes, created a world that evoked the fairy tale world of the original story whilst being firmly located in the present.

“Audiences were intrigued by the final scene that had 18 red cloaked performers on stage to witness the little girl Red Riding Hood resurrect her grandmother from the stomach of the Wolf.”

The piece is still in development and the ensemble will continue to deepen their exploration of the production’s key themes, with plans to stage the show in other venues in the coming months.

In the past, the ensemble’s work has been inspired by mythology and fairy tales, and last year for the 1916 Centenary they explored what life would be like in a just Republic, both in the past and the present.