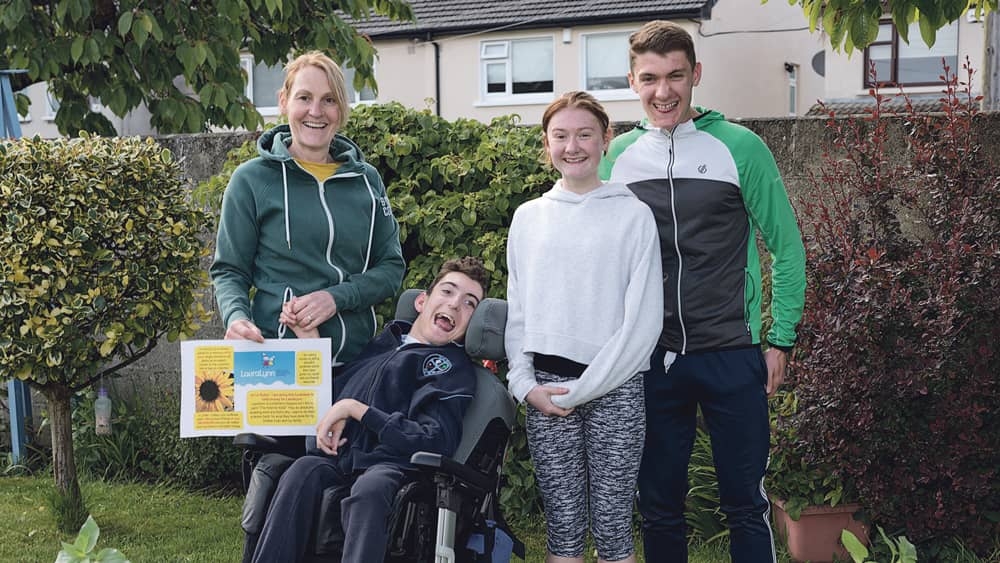 Sowing the seeds of love

A 12-YEAR-OLD girl raised €6,500 for The LauraLynn Children’s Hospice by growing and selling Sunflowers, as a token of appreciation for the help her brother and family have received.

Ruby Swaine came up with the fundraising idea last March when the country first went into lockdown.

Evan with mam Paula, brother Luke and sister Ruby with the sunflowers

Ruby bought 4 packets of sunflower seeds, sowed the 100 seeds in empty egg trays from the kitchen and decided to sell the sunflower shoots for €5 each in hopes to raise €500 for Laura Lynn.

Ruby, who is a student at Scoil Ide in Clondalkin, quickly realised the interest in the Sunflowers had exceeded all expectations, and has since sowed 400 seeds, raising an astonishing €6,500 for Laura Lynn.

Ruby, who calls The LauraLynn Children’s Hospice “The Hotel for Kids” said that she decided to raise the money for Laura Lynn as they do amazing work and have helped her brother Evan who avails of their services and has allowed her family to live a happy, normal life.

Speaking to The Echo, Ruby and Evan’s mother Paula explained that her son Evan, 17, was born “perfect” with no health conditions alongside his twin brother Luke, but at the age of 16 months had a choking incident while eating that resulted in him being on life support for ten days and subsequently diagnosed with quadriplegia cerebral palsy.

Paula says that despite his condition, Evan “loves the craic, loves messing and music and is well engaged”.

“I am working from home and he will sit at the other end of the table singing to me, he’s being spoilt rotten, Paula jokes.

Evan is wheelchair bound and requires 24-hour care and is non-verbal. He communicates through laughter and crying and can engage and communicate using his eyes.

“He has night-nurses in the house because of his condition and he requires oxygen if he gets tired or spends too much time laughing or singing, he gets exhausted and needs oxygen. Respiratory would be his biggest issue at the moment.”

Evan attends Scoil Mochua in Clondalkin full-time but has only been able to attend school for 16 days in 2020 and only six days so far in 2021 as he would be very high risk and vulnerable to Covid-19.

Evan’s family began using the services of Laura Lynn in 2017, after his condition took a turn for the worst and the family were referred to the organisation to get respite.

Due to the nature of Evan’s condition, it is not easy to go places or do activities as a family on a whim or without a great deal of planning, as they need to make sure that there is accessibility for Evan’s wheelchair.

Paula explained: “Laura Lynn have allowed us to have family experience.

“We get 15 nights a year – some families will use that as their two-week family holiday and have the child in respite, but we use it for a week maybe in the summer or use it for a long weekend in October and bring my other two children over to London to visit my sister over there because her house wouldn’t be able to accommodate Evan.”

To mark National Hospice Week, which was launched on May 17, Ruby has sowed another 120 seeds to sell, and hopes to sell them to companies who may purchase them to give as a gift to their staff, or as a “Hello Again” gift for friends and family finally allowed to meet up again as restrictions lift.

Ruby’s mam says that she has received a huge amount of support from everyone in Clondalkin village where she lives, with local companies lending a hand to help her fundraiser.

If you would like to donate to Ruby’s fundraiser, you can do so by visiting this link.