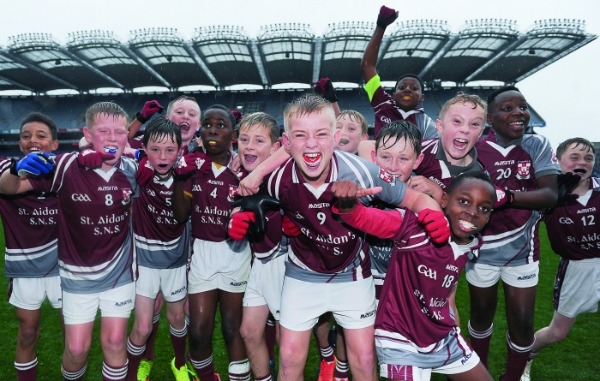 ST AIDAN’S SNS captured their first senior boys Cumann na mBunscol title in 22 years after they just managed to edge out Gaelscoil Choc Liamhna in the Corn an Cheid decider in Croke Park on Tuesday.

The Brookfield school had to weather a strong second half comeback by their opponents, earning a 1-8 to 2-4 victory with Peter Wall Boggins converting a late free to see them over the line.

Indeed they managed to chalk up a goal and six points in the opening half, Jimmy Wall finding the back of the net after he refused to give up on a long ball that appeared to be running out of play, turning it in from a tight angle before it crossed the byline.

Daniel Kielthy was also in superb form for Aidan’s, hitting four points that included a tremendous 35-yard effort early on.

It left them well in command at the halftime break given that Knocklyon had managed to put only a solitary point on the board through Zac Ó Nualláin.

Yet they rocketed their way right back into contention in the second half thanks in no small part to goals from Callum O Duibhin and Charlie MacNeighill.

Ó Nualláin again split the posts for another point while Conor MacGabhann followed suit to see them square the match.

But Boggins, whose brother Aidan also got on the scoresheet for the Tallaght side, held his nerve to send over the winning point when his side was awarded a free out wide.

And Joe Hutchinson used up the remaining seconds when he caught a highly ball beautifully before taking play downfield and away from the St Aidan’s goal.

It was a thrilling win for this team, which under captain Michael Cash, subsequently brought home the first senior boys title to St Aidan’s since 1994 when current St Patrick’s Athletic captain Ger O’Brien skippered the side to success.

While they will be disappointed at going so close, Knocklyon can be very proud of their efforts this season.

But the day belonged to St Aidan’s who also had their own netminder Anthony Farrelly to thank for keeping them in front at times.

Coaches Mark Maloney and Tomas Hayes were quick to acknowledge the work of Noel McCullagh in training the players over the last few seasons and were thankful for the great support they received from teachers and students on the day.