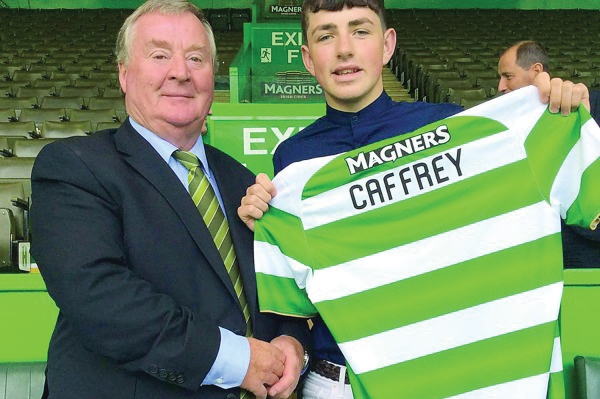 BALLYFERMOT and St Francis player Tommy Caffrey has penned a three-year deal with Scottish Champions Celtic Football Club after a magnificent few years with the Saints.

The centre-forward, who represented Ireland earlier in the season, turned down other clubs in the UK to accept a long anticipated offer from the Hoops, according to his coach Mark Connelly.

“He was one of our best players, he had other opportunities but I think he was always set on Celtic, the lad has a good attitude and deserves it, he has done very well for us this season and we wish him all the best”, stated the Francis coach.

The Baldonnell club also sang the praises of their former man stating, “He has done the club proud. We believe he is the best in the country for his position and his age group. We wish Tommy all the best in Scotland.”

Connelly, whose parents are from Clondalkin, plays midfield for Francis. He made his debut for Ireland U16 side earlier in the year against Turkey and was also included in the squad that beat Slovakia and Hungary in the UEFA Development tournament.

Coach Connelly also spoke about the Saints ‘golden generation’ stating, “At this age it’s important to keep players interested in football, and most of the lads have done that, we’ll have some lads over in England next season and some might be even playing in the League of Ireland.”

“Jack was injured last season and he showed great determination to come back this season, it’s an exciting time for the club and for the players who have showed determination and commitment throughout the season”.

The saints U16 Elite, which included Caffery and Connelly, finished runners-up in their league the season just gone.