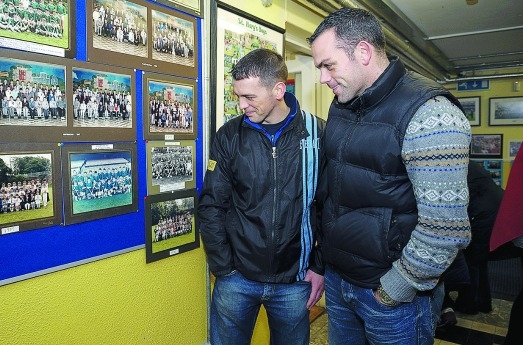 Numerous public representatives, past pupils, staff, along with current staff and students attended the festival of events at the school grounds in Lucan.

St Marys BNS Principal Dara Burke and former principals cut a 50th birthday cake in the school hall before unveiling a plaque in the courtyard to commemorate past teachers and pupils who have died – with school chaplain Fr Philip conducting a short service.

A time capsule – to be opened in 2040 – was buried. On hand to help with the digging was Mondo from Fair City, aka former St Mary’s pupil George MacMahon.

Principal Burke commended staff and students for their hard work over the last few months to ensure the day was a success.

Principal Burke said: “As the newly appointed principal of St Mary’s BNS, I was honoured and privileged to welcome all to the celebrations. Our school opened its doors for the first time in 1965, and it has grown and flourished in the intervening years.”

Adding a nice touch to the celebrations, a commemorative booklet was launched featuring testimonies from past principals, teachers and pupils.

This booklet contains many standout memories over the 50 years with many nuggets for those closely involved.

Students at the school worked on projects based on each of the decades and a ‘sixties’ room was recreated to give children an idea of what it was like in the olden days.

The history of the school actually goes back much further – to 1864, when the then three-classroom premises was located just inside the church gates before moving to its current location at Chapel Hill in 1965.