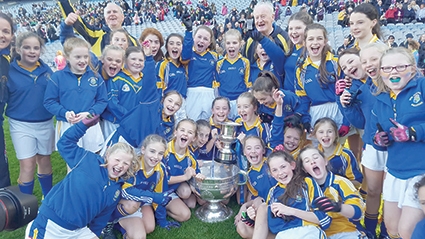 THERE was a lot of celebrating in the Cusack stand, and back in Ballyroan as Scoil Naomh Pádraig girls team clinched their first Cumann na mBunscol title in more than 20 years, winning Corn an Chladaigh by a score of 4-5 to 1-2

After braving the aftermath of storm Ophelia to beat Scoil Mhearnóg, Scoil Bhride Ranelagh awaited them in the final.

Some 300 pupils from the school descended on the Jones’s Road venue, a stadium they last visited 12 years ago, quietly confident they could clinch the title after fine performances in previous rounds.

In the group stages, they played Scoil Bhride, who had a few players back from injury who had not feature in the previous game, so they knew the challenge would be a formidable one.

But the Ranelagh schoolgirls had not reckoned on the prowess of Naomh Pádraig’s Karrie Rudden. The midfielder was in red-hot form on the pitch, scoring a total of 4-1 as the Ballyroan side claimed the trophy.