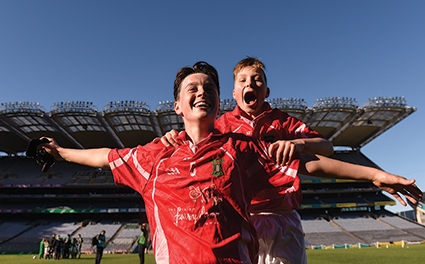 GAELSCOIL Chluain Dolcáin and their near neighbours Our Lady Queen of Apostles Clonburris played out a thrilling derby in their Corn Chlanna Gael final in Croke Park.

The final scoreline of 2-4 to 2-8 is testament to just how high-octane this game was, with both sides truly giving their all on the day.

Indeed it was Clonburris who were first out of the traps with Seán Walsh slotting over a point, and he then later lobbed the ’keeper to score the first of his school’s two goals in the match.

Their rivals responded with three points, with Euan Ó Baoill’s score the pick of the bunch..

Seán Walsh soon had his side’s tails firmly up early in the second half, as he scored his second goal of the match, and Eoghan Kinlough-Byrne kicked over a point soon after.

These scores seemed to spring the Old Nangor Road school back into life, as Dónall Ó Duáin hit a point before Tomás Ó Muireagáin blasted the ball into the back of the net, to put Gaelscoil Chluain Dolcáin in front for the first time in the match.

As the final whistle neared, their lead was increased as Tadgh Ó Catháin cooly converted a penalty to ensure victory for his side.