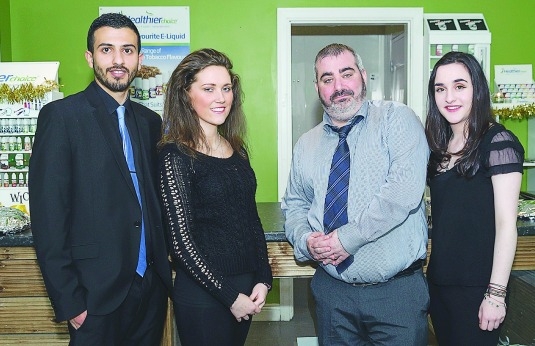 A NEW start-up internet café, vaping and IT repair service in Kiltipper, has wasted no time supporting the local community.

Soho Solutions, based at Marlfield Row – behind Kiltipper Cafe Bar – are donating all money raised through their internet terminals in December to local homeless support group Visit.

Soho owner Stephen Quinn decided to embark on the kind-hearted gesture, as he was familiar with the work carried out by the “wonderful people” who volunteer with the group.

Firhouse resident Stephen (36), volunteered time and donated items for recent Visit initiatives, after his wife drew his attention to their work.

“I will continuously support them,” said Stephen, a former IT employee who spent 16 years working for numerous multi-nationals such as Microsoft and HP, before deciding to begin his own venture.

Soho Solutions officially opened on Saturday – a festive day of celebrations that included gifts for children and wine and champagne for the adults.

Utilising the retail space in Kiltipper, Soho Solutions are tapping into a growing market by providing an extensive vaping service with all the acoutrements.

Stephen also plans to install and lease out retro arcade games, and hire staff in the months ahead.

“The word Soho is an IT acronym for ‘small office home office’ and would be recognised by geeks who work in the industry,” said Stephen.

He continued: “Up to last year I was working for Barclays Bank, training engineers to go to Barclays Bank centres abroad. It was a nursery for foreign markets.

“Last year, it was my responsibility to close down a call centre in Sandyford Industrial Estate which contained 350 people. That’s the thing about multi-nationals, they can make life difficult in an instant, when there is a change in the line of management.

“When I thought I might become redundant in 2012, I registered the Soho name, and considered other job ideas, before going full circle and back to computer repair. I’ll be looking to take on staff with a flair for IT, and help give them the skills to move on, or stay with me.”

Soho Solutions is open from Monday to Saturday between 10am and 6pm – visit www.facebook.com/SoHoSolutionsDublin for further information.