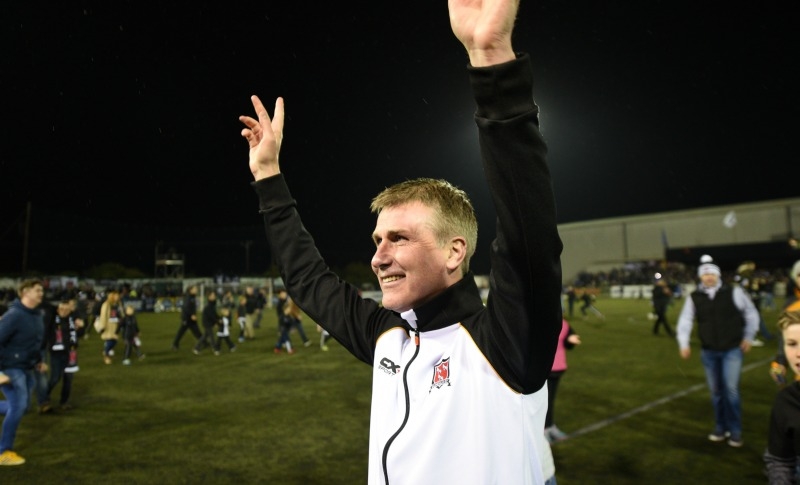 STEPHEN Kenny insists his Dundalk team cannot afford to rest on their laurels if they are to remain the Number One club team in the country.

The feat came with two games to spare and two days before a second string Dundalk side lost out 5-2 to St Patrick’s Athletic in Richmond Park on Tuesday.

Yet, given the fact that the Lilywhites have three massive games in the Europa League (the next one away to Zenit St Petersburg on Thurs-day) as well as an FAI Cup Final against Cork on the way, few were surprised to see Kenny ring the changes for the trip to Pat’s

Speaking to The Echo, he saluted the efforts of his players and backroom staff after making it three-in-a-row.
“They’re a great bunch of players. They have great humility and selflessness. They have that hunger to succeed and want to constantly improve.

“It has been a tremendous effort by everyone at the club. We have a great backroom team and a great assistant manager in Vinny Perth who’s now emerging as an exceptional coach.

“It was important that we won the league on Sunday because we didn’t want to be having to go to Inchicore and try and win it there with a 48-hour turnaround.

“We fly out on Tuesday [to Russia] and then we’re back on Friday and have the Cup Final in the Aviva Stadium on Sunday.
“We have three big games left in the Europa League to get out of the group.

“The players have played very well away from home. We scored in Iceland and in Holland and we have to show that we can do that again next week.

“They [Zenit] have an annual budget of €165 million. They have great players like Axel Witsel and we need to really play well to try and get a result.

“After that we’ve got the Cup Final against Cork who are an exceptional team and it’s going to be tough,” he insisted.

In all it has been an amazing season for the Lilywhites who have battled away impressively on so many fronts this year.

Having now landed a third successive Premier Division crown and made it to the brink of another domestic double, as well as remaining well in the reckoning for qualification from Group D in the Europa League, many view this Dundalk team as arguably the best the League of Ireland has ever produced.

Kenny, however, is reluctant to make that assertion, saying: “It’s very difficult to compare eras and you don’t want to be disrespectful to teams from other eras, but one thing is for sure, they’ve definitely been the best team this year,” he declared.

Certainly they have surprised so many with their exploits on the European stage this season, occupying second place in their Europa League group, one point ahead of Maccabi Tel-Aviv and three points the better of AZ Alkmaar.

Yet before they return to such heights of the game the team will bring the curtain down on their league campaign with a match against Galway in Oriel Park tonight.