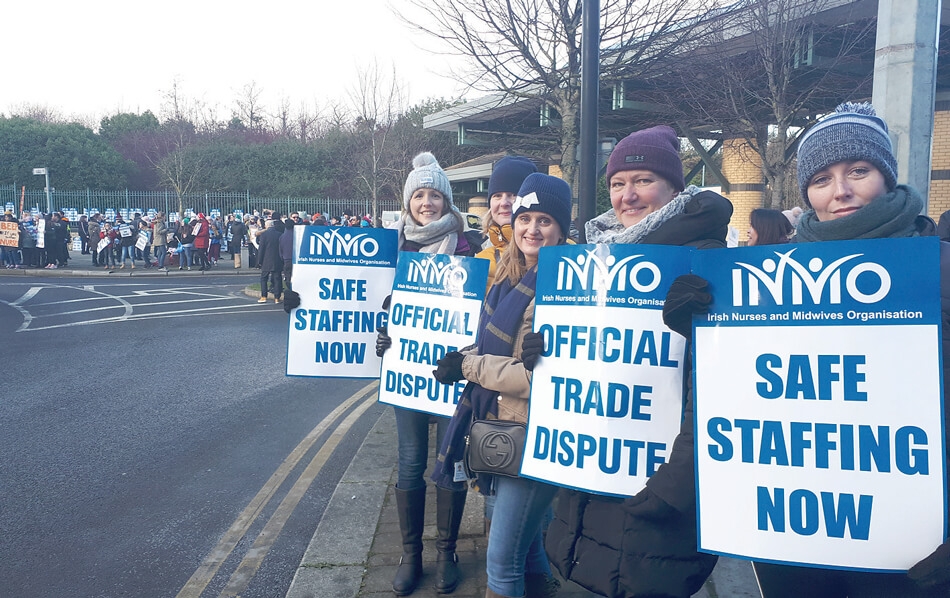 Strong show of support for nurses on picket line

There was a solid show of support for the nurses’ strike outside Tallaght University Hospital (TUH) on Wednesday, with local businesses and services delivering food and warm drinks to those on the frontline.

At 8am on Wednesday, nurses and midwives nationwide embarked on a 24-hour work stoppage in their fight for improved pay and work conditions – and better patient outcomes.

Here in Tallaght, it is estimated that around 400 nurses took to the picket line outside TUH, with chants of ‘safe staffing now’ echoing around the area – alongside the constant, supportive beeping from passing cars.

Local businesses, including shops in The Square, dropped food, sandwiches, pizza, soup and warm drinks to nurses throughout the course of the day.

The Glashaus Hotel also made numerous trips across the road with a trolley-ful of tea, coffee and muffins, while Tallaght University Hospital sent out soup and sambos.

The crew at Tallaght Fire Station also dropped by in one of its fire trucks with a special delivery of soup.

“It’s a show of solidarity between ourselves and our colleagues who unfortunately have had to go on strike today”, one firefighter told The Echo.

“We see the hard work that they put in on a daily basis, all while being understaff and underpaid, and so we wanted to show our support.”

Sinead Cleary, TUH nurse and communications officer on Tallaght’s strike committee, thanked the public and their patients, colleagues and fellow care professionals for their phenomenal support.

There was a strong show of support for nurses at Tallaght

“The support was phenomenal”, Ms Cleary told The Echo.

“I think people understand that we are doing this for them.

“We were all united outside Tallaght University Hospital [on Wednesday], management and staff.

“This is about patient safety… and it’s Government we are looking to talk to.”

“We are so highly skilled, so experienced, with such expertise that we need the government to recognise this, because they are recognising it over seas and we need to give our colleagues a reason to come back home to us.”

Nurses braving the cold outside TUH

The 24-hour work stoppage was the second time in the INMO’s (Irish Nurses and Midwives Organisation) 100-year history that its members went on a national strike.

Further strike action is planned if an agreement can’t be reached with Government.

If the dispute goes unresolved, further 24-hour strikes are scheduled to take place onext week on the 5 and 7 of February, and then the 12,13 and 14.

While contingency measures were put in place on Wednesday, and emergency departments remained open, it is reported that around 25,000 patients nationwide had medical appointments cancelled.

In a statement to The Echo, a spokesperson for Tallaght University Hospital said that all patients who had appointments or procedures rescheduled will be “prioritised and rescheduled” for admission in the coming weeks.

“The level of disruption resultant from this industrial action underlines the significant role nursing professions play in our hospital”, the spokesperson said.