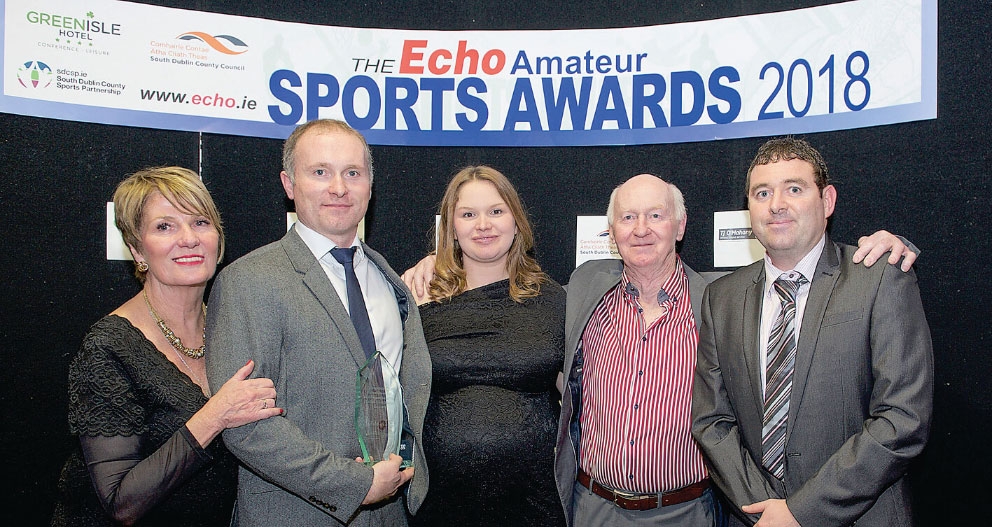 Introduced this year to recognise great achievements in disability sport, this new accolade went the way of a competitor who, in only his first season in the sport, played a major part in helping his Shamrock Rovers team to a cup double before lining out for his country in the 2018 Amputee Football World Cup in Mexico.

Indeed, the newly-formed Rovers team raised their first ever trophy when they won the Marnofields Cup in Limerick.

In the Final against Bohemians McEvoy fired home the goal that saw them fight back for a 1-1 draw, forcing a penalty shootout which the Tallaght side eventually won 4-3.

In September they made it a double by winning the IAFA Fyffes Cup at Oriel Park seeing off the challenge of Cork City and Bohemians en route to the prize.

They beat their Dublin rivals in the decider, Kevan O’Rourke registering the only goal of that match.

Stuart, along with fellow Shamrock Rovers players Simon Baker, Kevan O’Rourke, Chris McElligott and goalkeeper Justin Guiney were selected as part of the Ireland squad that would contest the 2018 Amputee Football World Cup in Mexico.

There they finished 13th after carding wins against Uruguay, Columbia and Italy, to move up five places in the World Amputee Football Federation rankings.

Speaking about the past year, McEvoy said: “It’s been a bit of a whirlwind to be honest.

“This time last year I was at the Cappagh Hospital Christmas Party and Chris McElligott, who founded the Amputee Football Association, pretty much threatened me to go training in January. If I didn’t he’d come hunt me down,” he laughed.

“We trained January, the league started and all of a sudden it kicked off from then.

“In fairness to our manager Stuart [McSweeney], the Coach of Shamrock Rovers, he put a good team together, training is interesting. We won two cups throughout the season and it just grew on.

“I think with another one more round of the league we would have won the league- it got that close near the end.

Accompanying Stuart up on stage on the night was Shamrock Rovers Amputee Team Head Coach, Stuart McSweeney, who said “To take it back at the start of the season, the first night I seen him [Stuart], he couldn’t stand on his crutches, he kept falling over, but to be fair to him, every time he fell over, he got back up again. He had this determination.”