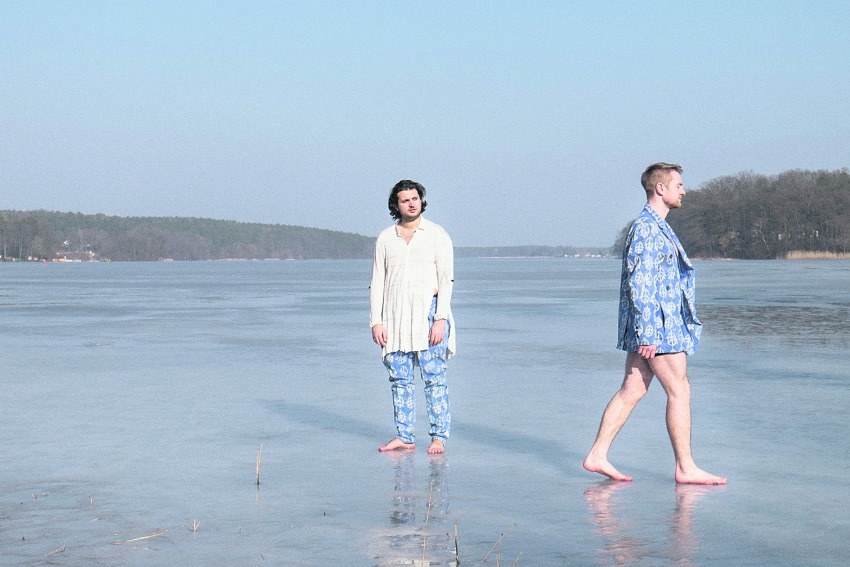 NAMED after the area of Tallaght where the two musicians realised they had a common connection, Kilnamana is an electronic band who weave synth soundscapes with meandering vocals.

The Berlin-based duo, consisting of Enda Gallery and Miguel Garcia Soler, discovered they had a common connection through the Dublin suburb where Enda went to primary school and Miguel learned English.

The band recently released the video for their new song ‘Adios Amigo’, which was filmed in Lake Dan in Wicklow and Krumme Lanke in Berlin, and their debut album ‘Suicide Paradise’ was released last week.

Enda, a past pupil of St Kevin’s Boys’ School in Kilnamanagh, took some time out to speak to his local paper.

You met Miguel in a language school in Berlin before you both realised your connection through Kilnamanagh, what was the reaction like when you realised you’d both lived in Kilnamanagh?

It was crazy. I’m a big believer in these kinds of coincidences meaning something special. And actually, we had been working together for a little while and hadn’t thought of a name yet. Then we realised we had this connection, and it was so unusual that we knew the name of the band had to reflect this shared history. Suddenly our trouble finding a name was over.

Was there a particular moment when you both realised you worked well together as musicians?

I was very busy at the time producing other artists. Miguel had just moved to Berlin and was playing live with his brother who was very established in Germany. He heard my stuff online and then was asking me to do a session with him for a few months. Finally on the last day of language school when we had a chance to speak I thought – “This guy is cool, I’ll do a session with him”. We wrote the first song on the album in that session. For Miguel that moment came ten seconds after I started recording vocals on the first track. We called it BSI because that is the name of the language school. We found it very easy to work with each other. It wasn’t on my radar that we would keep working together, but it all happened so naturally and now here we are. The order of songs on the album is the order in which we wrote them.

You shot the video for ‘Adios Amigo’ in Lough Dan in Wicklow and in Krumme Lanke in Berlin, what was that experience like?

It was so unbelievably cold. People have asked me how cold it was – it was really, really cold. There are some outtakes where I’m almost blue! What people forget is that with making music videos you have to do things a lot of times, because you don’t always get it right with the shot on camera. In the end we mostly used the one best take from each lake.

How did you feel when you got out of the lake?

After Krumme Lanke I couldn’t feel my feet for about 30 minutes. It was similar with Lough Dan in Wicklow. We enjoyed it a lot, though. We worked with one of my best friends, Dave O’Carroll, on the video, so it was three friends having a good time and we were very committed to making something cool. I had the idea for disappearing in the water in that way a few months before, and I was so happy to see how similar to the idea Dave was able to make it. It was amazing. I was really proud of him, he did incredible work and it was so good to work with him.

Where did the inspiration for the songs on ‘Paradise Suicide’ come from?

It was inspired by things going on for me and Miguel at the time. Relationships, past experiences and new experiences in Berlin, getting new and wider perspectives from life. It was very therapeutic to make. It felt like letting out what was in the subconscious. Often Miguel would come to my place with some music ideas and I would just let out whatever was going on for me with melody and lyrics and that was the song, hardly anything was re-recorded after the first three takes of improvised writing.

How would you describe your sound?

It’s very natural, handmade, real, and playful. We don’t like to polish too much and we take a lot of risks. We don’t try to do what everybody else would do. Miguel loves old Casio keyboards and I love very playful vocal parts. Most of the lyrics have a spiritual or self growth undertone and can be directed at myself or another person at the same time.

What can listeners expect from ‘Suicide Paradise’?

Realness. I have seen few album productions as real, raw and natural as this.