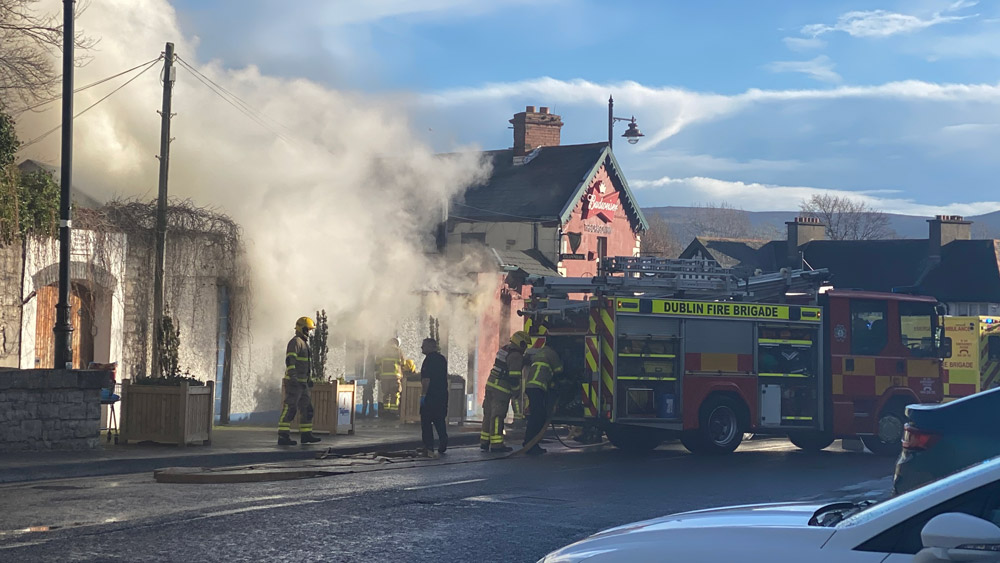 SUPPORTS are available to help restore the St Dominic’s Hall building in Tallaght Village after it burned down late last year.

Located next to The Dragon Inn pub, the building which is more than 100-years-old and has served many different uses went ablaze on November 27.

Five units of Dublin Fire Brigade descended on Tallaght Village, after volunteers carrying out a clean-up in the area smelt smoke and called 999.

Units from stations in Tallaght and Dolphins Barn attended, with the assistance of a turntable from Tara Street, to bring the flames under control.

It was raised at the Tallaght Area Committee meeting by Cllr Mick Duff about advice and supports which could be offered to the owners of the building, the Dominican Order, following the inferno.

South Dublin County Council outlined that Architectural Conservation Grants are currently available after being announced by the Department of Housing, Local Government and Heritage.

This scheme is for small works with maximum grant aid of €15,000 available with 50 percent leveraged by the applicant towards the work.

The Historic Structures Fund (HSF) would also be applicable for larger labour intensive conservation projects, however, the council believes the rebuilding works required may not qualify.

“The Councils Architectural Conservation Officer would need to assess the current condition of the building and can then advise with regard to the damage/condition and work required,” the council stated.

“The fire of the old post office has now only been brought to the attention of the Architectural Conservation Section, LUPT.

“It is advised that a representative from the Dominican Order contact the Councils Architectural Conservation Officer directly to request further advice and information on possible financial supports.”

Believed to be well over 100-years-old, the cottage was originally a residence before evolving into a space that would grow with its community when extended by the Dominicans.

St Dominic’s Youth Club, a Post Office, Tallaght Centre for the Unemployed and numerous groups, clubs and support services have all called this little building home.

There’s been plays staged, dances danced, and music played over the years.

Letters posted, CVs written, and friendship and support all offered within its walls.

Some remember a boxing club in the hall in the early seventies and many a movie night held, at a time when the arrival of a cinema in Tallaght was decades-away.

Most recently, the building, which is still owned by the Dominicans, was home to AA and Narcotics Anonymous.