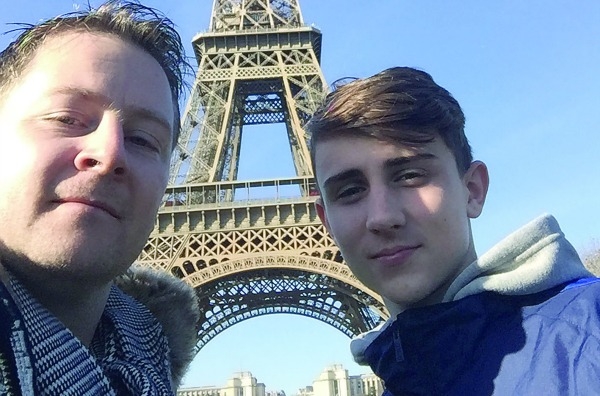 Taekwon-do champion in Paris during trauma

A WELL-KNOWN Tallaght athlete and his coach were in Paris for an international sporting event when tragedy hit the city last weekend.

Irish National Taekwon-do champ Jack Woolley and his coach Robert Taaffe travelled to France last Friday for the Paris Open World Championship, where 17-year-old Jack was due to make his debut on Saturday at the Olympic weight of 58kg.

However, due to the seven co-ordinated terror attacks which killed at least 129 people and left hundreds injured, the tournament, which was to be attended by around 600 international athletes and Olympians, was cancelled.

Robert Taaffe, a Citywest resident and coach at South Dublin Taekwon-do in Tallaght, told The Echo: “Jack had travelled to Paris earlier in the day than me, I landed at 10pm – around 10 minutes after the first attacks happened.

“The minute I landed and turned my phone on, it started hopping with calls and messages from friends and family checking to see if we were okay.

“The airport was pretty manic. There was lots of distress and security and the taxi queues to get away from the airport were pretty long.

“Travelling through the city there were sirens and flashing lights all round and once I got to Jack in the hotel, we contacted everybody at home to let them know that we were safe.”

He added: “We decided on Saturday just to bunker down in the hotel rather than trying to get a flight home and it was very surreal watching all of the TV footage inside the hotel and then hearing the sirens outside.

“However, on Sunday we got up and went out. There was a massive military presence, which was comforting and terrifying at the same time.

“We visited the Eiffel Tower and despite all of the sadness, it was a pretty amazing experience – one which myself and Jack will always remember.

“There were so many people out and about and getting on with their lives, both locals and tourists – and there was a great sense of support, for those lost in the tragedy, and defiance, that people will continue to live their lives.”

Dublin MEP Brian Hayes, who is a resident of Kingswood in Tallaght and a former Dublin South West TD, was present at Martin Schultz’s, the European Parliament President, address on Tuesday.

Speaking to The Echo from Brussels, Mr Hayes said: “Martin Schulz’s address to MEPs remembering the victims of the Paris attacks was simple but effective.

“I think his central message was one of solidarity to the people of France and that we are not going to change our way of life.

“ISIS is attempting to destroy the values that we hold close, but try as they might they will not succeed, with Schultz’s speech being one of solidarity and defiance.”

He added: “I think a huge effort over a lifetime will be needed here, there is a lot of work to be done and we need to build up peace in the Middle East.

“Here in Ireland, the public need to help and be vigilant, reporting any suspicious activity.

“We also need to beef up Garda resources and our security presence in a way that it does not impose on people’s liberty.

“This attack was not just on France’s way of life but Europe’s and we will need to try and uphold the values that we hold dear.

“I think we also need to learn from the mistakes of the past when it comes to integration.

“In many countries like France and Belgium, integration meant segregation, with whole sub-countries developing within communities – many of which were like ghettos.

“Ireland is doing a good job in relation to integration but there is a lot more to do.”