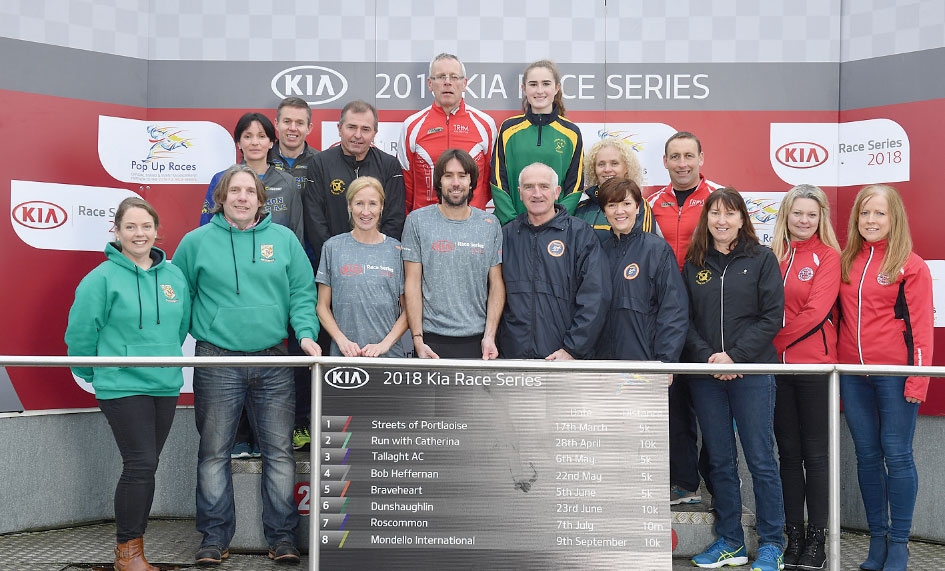 THE TALLAGHT AC 5km is been included in the new Kia Race Series which will take place in 2018.

The series will bring together seven well-established regional races around Ireland under one umbrella with an added closed road running event in Mondello Park.

The Kia Race Series kicks off in March with The Streets of Portlaoise 5k while the finale event in Mondello Park has been organised for September by Pop-Up Races.

The Tallaght AC 5k, taking place on May 6, will be the third event on the new series programme.

The club’s Derek Quinn and Sandra Warburton were present at the launch alongside athletic stars  Catherina McKiernan and Olympian Mick Clohisey.

The Kia Race Series is encouraging Ireland’s best male and female distance athletes to compete against each other, with a new Kia Stonic up for grabs for both the overall male and female winner of the series.

To be eligible to win the series, runners must take part in five of the eight races including the finale. There is the added incentive of €7,000 bonus fund available for course records.

The series is also open to runners of all abilities with all those who take part in the series receiving a commentative t-shirt. For more details and to enter on-line go to www.kiaraceseries.com.

“The Kia Race Series will encourage elite runners to race against one another; ultimately racing is the lifeblood of the sport” said Irish Marathon Record holder Catherina McKiernan.