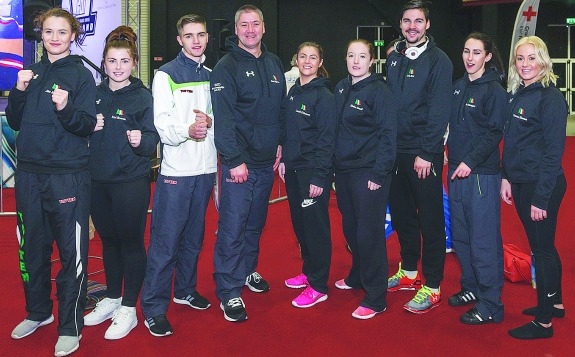 TALLAGHT Martial Arts and Bushido Clondalkin all boasted medal winners by the close of the hugely successful WAKO World Championships in Citywest on Sunday.

The former accounted for one gold, three silver and two bronze medals as Ireland emerged from the championship in second place overall.

Dean Barry fell just one step short of successfully defending the -79kg Points Fighting title he won in Turkey back in 2013 after he was pipped by Bulgaria’s Emanuil Dimitrov after having beaten Jamal Albini from the USA and Greece’s Efstathiou Triantafyllos in the lead up to the decider.

Making his debut for the Irish senior kickboxing team, Dylan Heffernan finished runner-up in -57kg Points Fight after beating Ioannis Nopas of Greece, Slovenia’s Miha Drnovsek and Italy’s Vincenzo Gagliardi only to lose to Roland Veres in a final that was level on eight occasions before the Hungarian took a decisive two-point lead late on.

There was silver also for Martin Bannon in the Veteran’s -94kg where he beat European champion Ron Peploe of Great Britain before losing out to Gunther Weninger of Austria.

Shauna Bannon had to settle for bronze in the -60kg Points Fighting division in which she made a blistering start, beating Croatia’s Evita Vltanioti on a maximum score before then losing to Belgium’s Evelyn Neyens in the penultimate rounds.

BMA Clondalkin’s Derek Deegan (pictured above) captured bronze in the Vets -63kg Points Fighting division after reaching the semi finals where he lost out to eventual winner Chris Collymore from the UK.

Collymore a very seasoned vet and undoubtedly one of the top points fighters of the last two decades found himself trailing the Dubliner 7-1 by the close of the first round.

Yet the UK competitor clawed his way back into contention over the next two rounds and secured the victory.

Jaide Gibbons was unlucky not to figure among the medals in the Full Contact -60kg division after she was caught with a late flurry of punches that saw her French opponent overtake in the dying seconds of their quarter final bout.