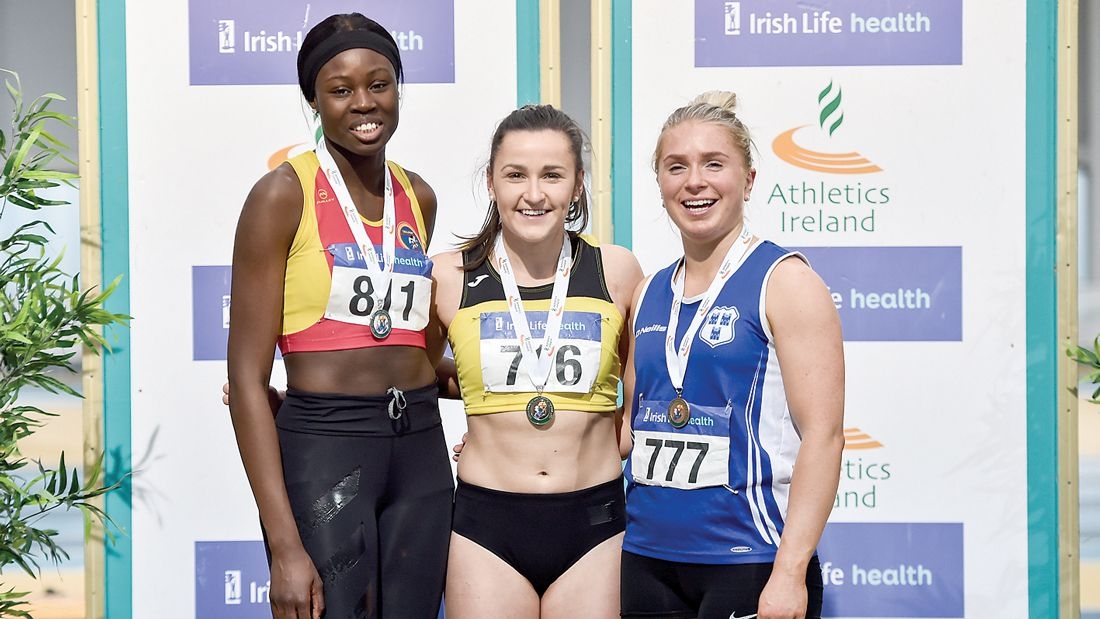 Tallaght athletes on top of their game in Nationals

TALLAGHT AC athletes were on top of their game in the last weekend’s National Senior Indoor Track and Field Championships held in the National Indoor Arena.

Rhasidat Adeleke was again in outstand-ing form on Saturday morning, posting a time of 24.20 on her way to winning her qualifying heat before later in the afternoon clocking an even faster 24.08 to take silver in the final behind Phil Healy (Bandon) who set a new National record time of 23.16.

Later that evening, Adeleke was presented with the ‘2019 National Female Juvenile Athlete of the Year’ award at the National Star Awards Ceremony in Tullamore.

The quartet produced a fantastic combined performance to win bronze in a time of 1.42.76 with only 0.50 seconds separating the top three teams on the podium.

The Men’s 4x200m team of Simon Essuman, Eoin Doherty, Timmy Bada and Joseph Ojewumi again linked up powerfully to win silver in 1.28.51- a time that was faster than the old national record and not far off the new national best time of 1.28.18 that was set by winners Emerald AC.

In the individual contests, Jennifer Hanrahan won bronze in the long jump after a leap of 5.55m before finishing fifth in her 60m semi-final in 7.72.

Joseph Ojewumi  recorded a time of 6.87 when finishing fourth in the 60m sprint final while Eoin Doherty and Timmy Bada crossed the line fourth and fifth  respect-ively in their 60m semis.

Simon Essuman and Bada both finished runners-up in their 200m heats while Sarah Doyle was fourth in the women’s equivalent.

Eoghan Keaney clocked a new personal best time of 4.00.37 on the way to seventh overall in the 1500m Final on Sunday.

Earlier on Sunday morning at the same venue, Mason Mitchell followed up on winning the 60m title the previous week when he produced another pillar to post victory in the Under 10 400m on the last day of the Dublin Indoor Championships.