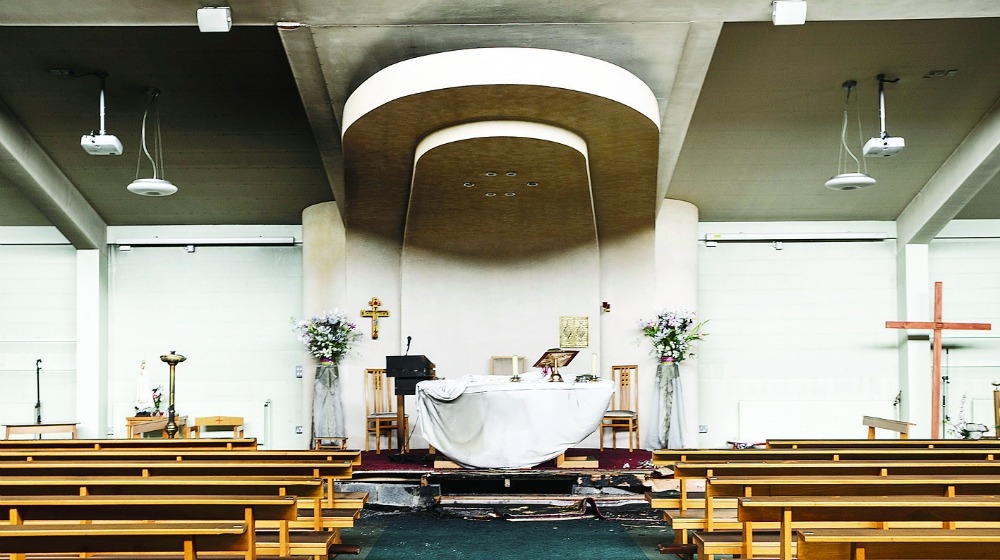 Tallaght church closed due to fire and smoke damage

ST AIDAN’S church in Brookfield was damaged in a fire that started on the premises in the early hours of Sunday morning. The church is now closed until the end of the summer due to internal fire and smoke damage.

The church’s altar area – only refurbished six years ago – was badly damage in the blaze, with the remainder of the interior destroyed by smoke.

The Echo understands that members of the community saved their church from any further damage when they called emergency services after hearing the alarm ringing.

Nobody was in the church at the time and the fire is believed to have started accidentally.

Father Pat McKinley told The Echo that the church is structurally sound but that the inside will have to be totally refurbished – work which could take until the end of the summer.

Fr McKinley said: “This is really disappointing news but thankfully nobody was injured in the fire.

“There are no suspicious circumstances around the fire, nobody was in the church at the time and it’s being investigated as accidental.

“We were alerted around 9am on Sunday that there was a fire in the church after residents heard the alarm and contacted emergency services.”

Communions were due to be held in the church next week, however they have been transferred to St Mark’s Church in Springfield.

“We hope that the community will support us in getting the church back up and running. Anybody who has any questions about Mass times or services is encouraged to contact Fr Jimmy McPartland or myself.

“We hope to get the church back open by the end of the summer.”

St Aidan’s is part of a cluster of parishes that includes St Thomas’s in Jobstown, St Mark’s in Springfield and the Church of the Incarnation in Fettercairn, with the services now transferred to the neighbouring churches until St Aidan’s church reopens.