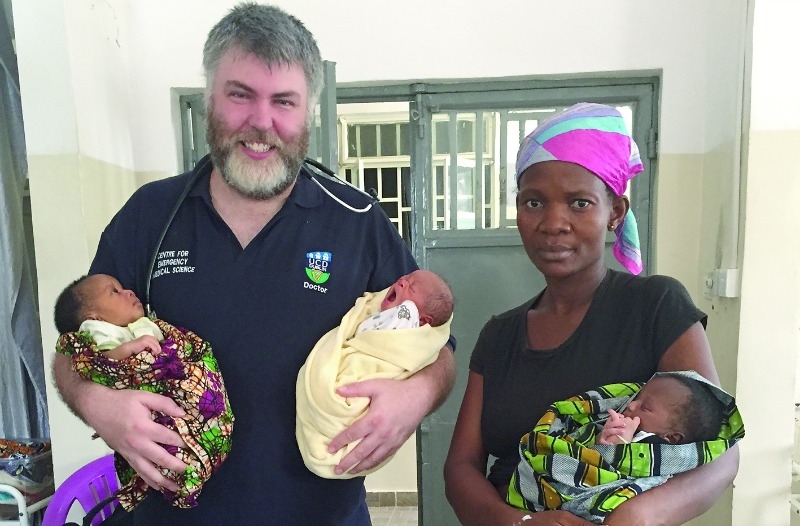 AFTER years of campaigning, a Tallaght doctor has helped to deliver a newborn baby facility in the Bo Government Hospital in Sierra Leone, which has one of the highest newborn death rates in the world.

A former Tallaght Hospital doctor, Niall Conroy, from Kilnamanagh, now works as a lecturer at the Centre for Emergency Medical Sciences in UCD’s medical school – alongside regularly visiting the Bo Hospital to help process advances in newborn baby health and facilities.

Speaking with The Echo from Sierra Leone this week, Niall said: “Sierra Leone has had, for many years, one of the highest rates of newborn death in the world.

“Progress was being made to tackle this, but a lot of that work fell apart in the last few years, when the entire focus was on fighting Ebola and stopping it from returning.

“As a result of this, the situation for newborns remains pretty desperate here, and Sierra Leone remains one of the most dangerous places in the world to be a baby.

“One in five don’t survive to see their 5th birthday and about 5 per cent don’t even make it past their first month of life.”

One of the major problems at the Bo Government Hospital was the absence of a unit for sick babies, with babies born in a critical condition worked on in the delivery room and then sent to a general, overcrowded paediatrics ward, where they have to share a bed with a bigger child who may have pneumonia, meningitis or a bad stomach bug.

“What that meant, in reality, was that the babies who were lucky enough to survive whatever illness they suffered at birth would frequently die from catching another infection from the kids in the children’s ward”, Niall said.

“That was tragic for the babies and soul-destroying for myself and the nurses.

“As a result of this, I have for years been making representations to the World Health Organisation, UNICEF and local Ministry of Health officials, asking them to establish a special care baby unit, where these delicate newborns can be isolated from other sick patients so that they might have at least some hope of recovery.

“Eventually, the stars aligned for us and the various government and UN agencies agreed to build a basic newborn facility, which has brought me out here on this visit.

“Newborns require very simple, but specialised, nursing and medical care [but] the skills to provide this care don’t currently exist in the region.

“So, I’m spending my days treating sick babies, while teaching local doctors and nurses to manage their tiny patients when I’m not here.”

The new special care baby unit is currently working out of a temporary building until the new facility opens in a few months.

Niall said: “In the few weeks that the special care baby unit has been open, we’ve had some great successes.

“This is not only good for the babies but it is good for society too, as the death of a baby has such wide-reaching effects on a family and a community.

“People here are no different to us. They grieve their lost children in the same way that we do. They just have to do it more often. Hopefully this work will help reduce that burden on families and the community.”

Niall has thanked the community of Tallaght for its continued support, with large donations of babygrows, hats, gloves and booties traveling the 7,500km from Dublin 24 to Sierra Leone.

Local community groups have also supported Bo Hospital over the years including the Kilnamanagh Youth club and Kilnamanagh Family Resource Centre, with the Black Panther Kickboxing Club in Brookfield, where Niall was a member, also supplying medical equipment such as thermometers and stethoscopes to the hospital in 2013.

“The Tallaght community has done a huge amount for us, all of which helps these tiny patients, who are otherwise forgotten about”, Niall said.