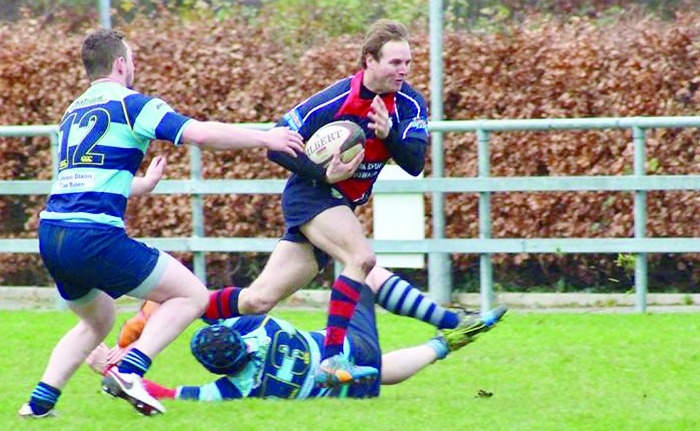 Tallaght men are Navan a fine time in Metro

TALLAGHT RFC ran in four tries as they served up a 0-27 defeat of Metro League Division Seven rivals Navan in Meath on Saturday.

The game was a mere two minutes old when they took the lead after the ball was kicked through and full back Simon Collie beat everyone to it to touch it down over the line.

In what was a fractious encounter that saw Navan reduced to 13 players at one point, Tallaght increased their advantage when Adam Nolan showed good hands to put Ciaran Rudd away down the line.

The winger demonstrated his pace to beat his man and score under the posts, Morgan Farrell converting to make it 12-0.

Farrell added to this with a penalty after which a fine run from Sean Judd and some great offloading from Dave Clarke, Jack Russell and Andrew Rudd forced another penalty.

This time the ball was kicked down the line for a line-out and Tallaght successfully mauled it over with Aaron Morgan getting the touchdown, a deserved reward for the flanker’s excellent all-round display.

Willie Lambe kicked a super conversion to make it 22-0 before a fine run from Gavin McKeon saw the ball go wide to Number Eight Adam Nolan, who powered through a tackle to score a try.

“It was a hard physical match, but I was delighted with how we kept our discipline” said Tallaght coach Tom Leigh.

“It was a frustrating first half, but we knew once we got our game going we had the beating of them out wide and that’s how it turned out.

“We’ve now got two big games in the next two weeks at home to DLSP and Blackrock.

“If we can win both of those we’ll be in great shape when the league resumes in the new year,” he insisted.